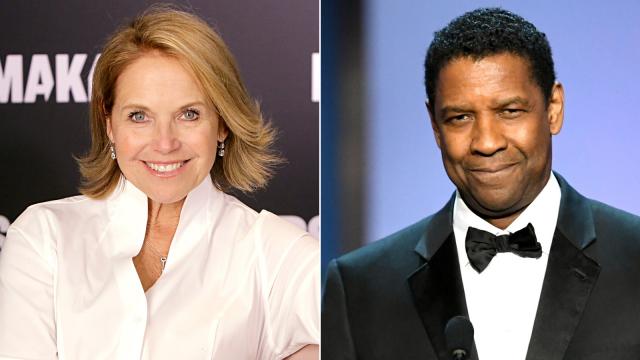 CNN — Katie Couric is recalling a 2004 interview she conducted with Denzel Washington.

The journalist recently appeared on the "Everything Iconic with Danny Pellegrino" podcast and talked about sitting down with the legendary actor for "Dateline" years ago.

Washington was promoting his remake of the "Manchurian Candidate," along with costar Meryl Streep and director Jonathan Demme.

Couric did not specify in the podcast which part of the interview she was referring to. Her 2004 Dateline story included the following: "While the New Testament might have been an unexpected and volatile sidebar, politics proved equally incendiary for Denzel."

"Denzel -- are you -- do you feel -- you know some people say Hollywood folks should stick to acting," Couric asked.

"I don't know what Hollywood folks are first of all," Washington responded. "Hollywood is a town that has some stars on the sidewalk. I don't know anybody from there."

He added, "I'm not a Hollywood folk. I don't know who they are."

Couric tried to reframe the question a few times, including asking him, "Are you an actor who would rather not..." but Washington cut her off.

Couric said during the podcast that the experience was "uncomfortable" and said she believes Washington "totally misconstrued a question I asked and kind of jumped all over me."

"I don't think I said anything wrong," she said. "I don't know what happened."

The Emmy winning interviewer chalked it up to Washington having a bad day and said he later wrote a generous check to the colon cancer foundation she founded.

"I love him, I admire him so much," Couric said. "He's one of my favorite actors, but I remember walking out and feeling really kind of shaken that he had kind of gone after me in a way that was completely, weirdly uncalled for."