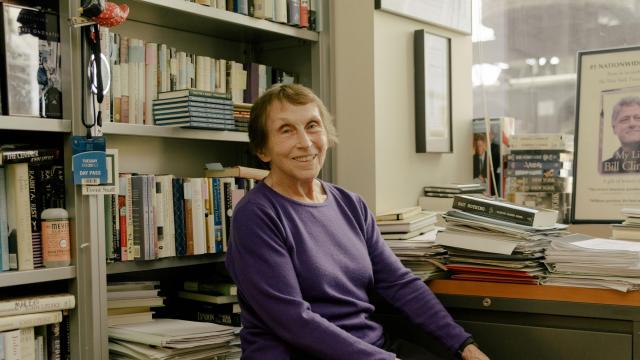 In 1963, on the Friday before Labor Day, Kathy Hourigan went to a Manhattan employment agency that specialized in publishing. The agency sent her to Knopf, the venerable publishing house, where the office manager gave her a typing test.

“It was Dictaphone, that’s what people did then,” Hourigan said on a recent afternoon. “The great editor Angus Cameron was dictating a letter to an author, with editorial comments. I said, ‘This is fabulous.’ I just loved it. And I took the job. Even though I was typing.”

Secretarial positions were the roles available to women at publishing houses (and many other workplaces) in those days. Young men got the apprenticeships and became editors. Young women typed up the men’s letters and contracts.

But Hourigan became assistant to a female editor on the rise, Judith Jones, who discovered Julia Child and edited John Updike. And she climbed the ranks herself, eventually ascending to her current role as vice president, managing editor of Knopf Doubleday. The job amounts to air-traffic control for a publisher: You keep dozens of books moving through the production pipeline, on schedule and without incident, and spend your career behind the scenes.

Not long ago at Knopf’s Midtown offices, however, the staff gathered to publicly acknowledge Hourigan’s service. Knopf’s editor-in-chief and chairman, Sonny Mehta, issued remarks, followed by Robert A. Caro, the two-time Pulitzer Prize-winning author and biographer, with whom Hourigan has worked closely for four decades.

It was the sort of valedictory gathering that marks a person’s retirement, only Hourigan, 77, was not retiring. She was celebrating her 55th anniversary at Knopf, making her the longest-tenured employee in its history, a legend within the confines of one office. Not that she wanted anyone to make a fuss.

“I said, ‘I don’t want anything. Please,'” Hourigan said in her small 12th-floor office a few days after the party. Out the window was a city tableau of water tower, buildings and sky. “Just a couple of weeks ago we had my 50th. It seemed like a couple of weeks ago.” Her desk and shelves overflowed with books and paperwork. Asked if her Manhattan apartment was also book stuffed, Hourigan said, “Yes, but this is no story about me.”

Wait, that’s why we came!

She lowered her head. “Ay yi yi.” Hourigan may demur the spotlight, but her colleagues feel her presence keenly in the halls.

After noting the singular achievement of working for the same publisher for more than half a century, Mehta told the assembled, “What sets her apart is her ability to keep a dysfunctional editorial team on task every day. And as far as I can tell she achieves this by hovering.”

There was knowing laughter. Mehta went on: “Indeed, Kathy hovers outside my office when I’m late. I used to shut the door hoping that would help, but her hovering is so fierce that it penetrates the walls.”

Speaking by phone later, Victoria Wilson, a vice president and senior editor at the company, called Hourigan “like a reckoning,” which she quickly amended to “a lovable reckoning.”

Ann Close, another senior editor, recalled that when she first came to Knopf, she asked a colleague for pointers. “They said, ‘Just attach yourself to Kathy Hourigan. She will find everything and do everything for you and it will always be right.'” That was in 1970.

Close added: “She’s a walking institutional history of Knopf. I have rarely asked her about a book that she doesn’t remember. She seems amazingly to keep up with every assistant we ever have, and ever had.”

Knopf is a place long on institutional memory. “It’s the town that time forgot,” Wilson said. Founded in 1915, only three people — Alfred A. Knopf, Robert Gottlieb and Mehta — have served as editor-in-chief since. A story goes that in the 1980s, someone asked William Koshland, then the president of Knopf, if he planned to see the revival of the 1928 musical “The Threepenny Opera.” He replied: “No. I saw the original production.” Wilson and Close each have more than 45 years at Knopf, while many of their “younger” colleagues have clocked 20 or more. Hourigan’s former boss, Jones, continued to work until age 87. “I’m not going to stay as long as Judith stayed,” she said.

But still, she is a link to the deep past. Alfred Knopf and his wife, Blanche, still ran the show when she started in the company’s dingy former offices at 501 Madison Ave., a girl from “across the river” in New Jersey who hoped to work an editorial job by day and write the Great American Novel by night.

Hourigan’s career has spanned the discreet era when authors mailed a single typed manuscript along with a carbon copy to be passed around, to today’s convenient but somewhat alarming electronic system where with one keystroke, a book can be widely distributed. She is reminiscent of long-forgotten characters like Harry Ford, a poetry editor with “an unerring ear,” according to his obituary in The New York Times, and Koshland.

Indeed, Hourigan would rather talk about them than herself. She gave up her writing ambitions, she said, when “I realized that all the manuscripts coming through the slush pile were written better than I could write.” She dismissed her very essential and complicated job as “nag, nag, nag.”

But others were eager to praise her editorial gifts. During the editing of “The Power Broker,” Caro’s Pulitzer Prize-winning 1974 biography of Robert Moses, he and Gottlieb had to cut 350,000 words from the manuscript. Tempers flared between them.

Hourigan was brought in to possibly defuse the tension, and made judicious edit suggestions, Caro recalled. “I remember thinking, ‘You know, Kathy doesn’t say very much, but when she says something I think we should listen to her. She has a great literary sensibility,’ he said. “And I’ve felt that for all this time.”

Hourigan has worked as a second editor on all of Caro’s books since, including his award-winning multivolume biography of Lyndon Johnson, for which she flew to Texas on a mission to track down archival photos of the president’s hometown that he wanted for the first volume. Hourigan has also acted as principal editor of books by Penelope Leach, the British child psychologist, and Elia Kazan, the film director. If not for her aversion to the job’s public-facing aspects, like schmoozing with agents and authors, Hourigan could have made a wonderful editor, colleagues say.

In her off-time, Hourigan travels, often with her friend and colleague Andy Hughes, Knopf’s senior vice president and director of production and design, and since 1980 she has spent part of every August on Martha’s Vineyard. The cottage where she stays, rented by other staffers too, is a kind of Knopf summer house.

For Caro, Hourigan is the embodiment of Knopf — what he imagined, as a young writer, a publishing house to be: a place slightly out of time that nurtures authors and takes great care to shepherd their books into the world.

“As the decades have passed, it has become apparent to me that that is less and less true of publishers today,” said Caro, working on the fifth and final volume of his Johnson book. “But in Knopf and in Kathy, I feel that image I had of what publishing ought to be has been preserved.”