Kamala Harris slams Trump's handling of coronavirus: 'He was scared' 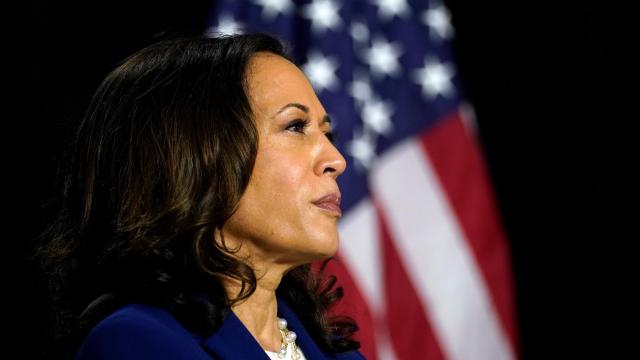 Ticking through what she characterized as Trump's early missteps, she said: "Donald Trump froze. He was scared. And he was petty and vindictive."

She said Trump was "fixated on the stock market" and "caved" to the Chinese government.

"And here's what you have to understand about the nature of a pandemic: It's relentless. You can't stop it with a tweet. You can't create a distraction and hope it'll go away. It doesn't go away," she said.

Harris' remarks were part of the Biden campaign's efforts to counter Trump -- a push that also included Biden interviews on cable news channels Thursday afternoon and a blistering new ad set to run before the President accepts his party's renomination.

She said Trump "doesn't understand the presidency" and believes it is "all about him." She said Trump has shown "a reckless disregard for the well-being of the American people."

"The Republican convention is designed for one purpose: To soothe Donald Trump's ego, to make him feel good," Harris said. "But here's the thing: He's the President of the United States, and it's not supposed to be about him. It's supposed to be about the health and the safety and the well-being of the American people."

"And on that measure," she added, "Donald Trump has failed."

Her speech echoes a new two-minute ad Biden's campaign is set to air on ABC, CBS, NBC and Fox News ahead of the convention. The ad is primarily a positive spot focused on Biden's biography, but it also jabs Trump's fitness for the job and handling of key issues.

"Some people are always in a hurry. They run when they could walk. Race up steps when others take it slow," a narrator says at the start of the ad as images of Biden running and biking are paired with viral video of Trump cautiously walking down a ramp earlier this year at the United States Military Academy at West Point.

The ad then pivots to Biden's biography, including the tragedy that has defined his life, and features Biden touting the country's ability to overcome this moment.

"America is an idea, an idea stronger than any army more powerful than any dictator or tyrant," Biden says in the ad. "And it's an idea as alive and powerful today as it was when it was first proposed."

The ad is part of the $26 million the campaign plans to spend on digital and television ads around the Republican convention.

Trump will accept his party's nomination with a speech on the South Lawn of the White House on Thursday night. The speech will mark the end to the Republican convention, a four-night event where the party sought to present a softer, gentler version of the President while reinventing his own record on everything from the coronavirus to the economy to immigration.

"At no time before have voters faced a clearer choice between two parties, two visions, two philosophies, or two agendas," Trump is expected to say, according to excerpts of Trump's speech provided to CNN. "We have spent the last four years reversing the damage Joe Biden inflicted over the last 47 years. At the Democrat convention, you barely heard a word about their agenda. But that's not because they don't have one. It's because their agenda is the most extreme set of proposals ever put forward by a major party nominee."

Almost all of the Republican speakers have also criticized the Biden-Harris ticket, casting it as radical and out-of-touch with America.

All of this is playing out as the latest instance of racial turmoil, this time in Kenosha, Wisconsin, after a police officer shot 29-year-old Jacob Blake.

The tumult continued later in the week, when two people were shot and killed during a night of unrest. Police arrested Illinois teen Kyle Rittenhouse on Wednesday and charged him with first-degree intentional homicide.

Trump has yet to comment on the Blake shooting, but Biden and Harris have talked with the Blake family.

Harris also addressed the shooting of Blake and the unrest that has followed in her Thursday afternoon speech.

She called video of Blake being shot in the back "sickening to watch."

"Seven times in the back. In broad daylight in front of his three young sons," Harris said. "As Vice President Biden put it the shots fired at Mr. Blake pierced the soul of our nation, it's sickening to watch. It's all too familiar. And it must end."

Harris, who is the first Black and South Asian woman nominated to the ticket of a major political party and would become the first female vice president if elected, said that "the reality is that the life of a Black person in America has never been treated as fully human."

Tying Blake's shooting to the police killings of George Floyd in Minnesota and Breonna Taylor in Kentucky and the slaying of Ahmaud Arbery in Georgia, Harris backed protesters who have filled the streets of American cities in recent months -- but drew a line between "peaceful protesters" and "those looting and committing acts of violence," including the 17-year-old Trump supporter from Illinois who police say shot and killed two people in Kenosha.

"It's no wonder people are taken to the streets, and I support them. We must always defend peaceful protest and peaceful protesters," Harris said. "We should not confuse them with those looting and committing acts of violence, including the shooter, who was arrested for murder. And make no mistake, we will not let these vigilantes and extremists derail the path to justice."

This story has been updated with Harris' comments on Thursday.