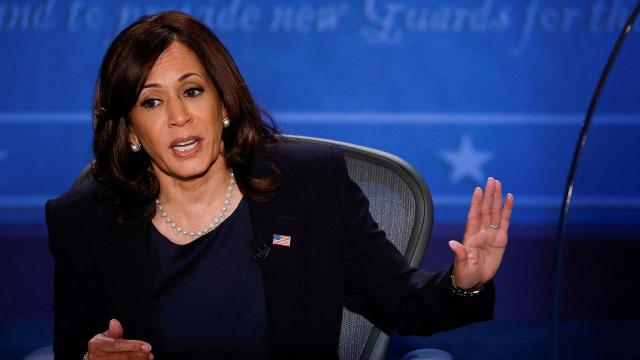 CNN — With Supreme Court nominee Amy Coney Barrett's confirmation hearings underway, many Democrats will be eagerly awaiting Kamala Harris' turn as the Senate Judiciary Committee's star prosecutor, hoping she can create one of those pin-drop moments that made her an irresistible pick to be Joe Biden's running mate.

But as this week's proceedings approached, close allies of the California senator cautioned that viewers tuning in shouldn't expect those kind of fireworks from the vice presidential candidate.

This time, Harris is playing a much more complex dual role, a Judiciary Committee member valued by her party for her courtroom skills, but also the running mate of a Democratic presidential nominee who has condemned the divisive, angry politics of Washington and is promising to be a president to people of all political persuasions. Instead, advisers say, Harris, along with her fellow Democrats on the committee, will keep the focus on health care and what Barrett's confirmation could mean for the future of the Affordable Care Act.

Unlike two years ago, the Supreme Court nominee this time is also not a former fraternity brother who faced serious accusations of sexual assault (which he denied). Instead, she is an accomplished University of Notre Dame law professor who has juggled caring for her seven children with her duties on the 7th U.S. Circuit Court of Appeals.

This isn't "Brett Kavanaugh, an antagonistic person with a troubled past," one source familiar with Harris' preparations said. "Rather than focusing on the person and the nominee, she'll focus more on the policy."

During her four years on Capitol Hill, Harris' star rose through her sharp interrogations of a long parade of Trump administration nominees -- most notably when she stared down Kavanaugh in 2018 and asked him whether he could think of any laws giving government the power to make decisions about the male body.

The judge stared at the table before him, then glanced back at the senator with an uncertain, "uh ..." visibly uncomfortable as she waited for his answer, her eyebrows arched. "I'm happy to answer a more specific question," he replied, looking for a rhetorical lifeline.

"Male versus female," she answered flatly -- letting his discomfort dangle in the air of the Senate Judiciary Committee Hearing Room.

The moment went viral, once again thrilling the Democratic faithful, and proving how Harris, the former district attorney of San Francisco and attorney general of California, could electrify a hearing room.

Twenty-two days before the election, Democratic senators, including Harris, are cognizant that there are political risks to appearing too partisan or aggressive, particularly when questioning a female nominee, who proved to be a calm and collected presence during her 2017 confirmation hearing for her federal appeals court appointment. While Kavanaugh's confirmation was uncertain, there is little doubt that Majority Leader Mitch McConnell has the votes to usher Barrett onto the Supreme Court before Election Day, provided members of his conference are not kept away from Washington because of coronavirus, which recently infected three GOP senators.

With many independent voters watching, Democrats also want to avoid unleashing the kind of conservative fury they stirred up back in 2017 when California Sen. Dianne Feinstein, now the top Democratic member on the Senate Judiciary Committee, questioned whether Barrett's Catholic faith would affect her decisions on the court, uttering a phrase that became a call to arms for religious conservatives when she said "the dogma lives loudly within you."

During the morning session, many Democratic senators showed pictures of Americans with pre-existing conditions, telling their stories and arguing that striking down the Affordable Care Act would have devastating consequences.

At the same time, the Democratic Party clearly wants a fierce confirmation battle that will inspire passion in their voters and rev up turnout ahead of the November election, by showing the real-world consequences of how Americans' lives could change once a 6-3 conservative majority is solidified on the Supreme Court.

It will fall to Harris to thread that needle.

Mirroring the argument of the Biden campaign, she plans to argue that Barrett's confirmation could mean that more than 20 million people could lose their health care and more than 100 million people could lose their protections under the Affordable Care Act. (The Supreme Court will hear oral arguments one week after the November election in a case where a coalition of Republican attorneys general and the Trump administration are asking the court to strike down the law.)

Harris previewed her strategy with her handling of questions about Barrett during her debate with Vice President Mike Pence last week, when she immediately pivoted from Barrett's record to the Trump administration's efforts to push through her confirmation.

She criticized Republicans for holding the hearings while millions of Americans have already voted and will soon be voting. Harris said she would always "fight for a woman's right to make a decision about her own body," but made her pitch mostly about what she cast as the harmful goals of the Trump administration.

She criticized Republicans' decision to rush through confirmation hearings at the same time that millions of Americans are voting. She said she would always "fight for a woman's right to make a decision about her own body," but spoke primarily not about Barrett's past decisions but about the goals of the Trump administration.

"It should be her decision and not that of Donald Trump, and the Vice President Michael Pence," Harris said of a woman's right to have an abortion.

Similarly with health care, she spoke of Barrett as part of a court that could provide the culmination of the longstanding crusade by the Trump administration and Republicans to overturn the Affordable Care Act.

"Literally in the midst of a public health pandemic when over 210,000 people have died and 7 million people probably have what will be, in the future, a preexisting condition because you contracted the virus, Donald Trump is in court right now trying to get rid of the Affordable Care Act," Harris said during the debate.

"This means that there will be no more protections if they win for people with pre-existing conditions. This means that over 20 million people will lose your coverage. It means that if you're under the age of 26, you can't stay on your parents' coverage anymore," she said. "The contrast couldn't be more clear. They're trying to get rid of the Affordable Care Act."

Though one of Harris' goals will be to use her line of questioning to elicit the human impact of the court's rightward shift, she has still done extensive preparation to get steeped in Barrett's writings, opinions and judicial philosophy, settling in this past weekend with a thick briefing book of those documents as she crafted her questions.

But health care will be her main focus, several strategists familiar with her preparations said, noting that was a central issue that drove Democrats and independents to the polls in 2018, helping to turn out enough voters to flip the House to their party's control.

This year, in the middle of the pandemic, the potential loss of health care coverage is an even more salient issue for millions of Americans. Moreover, it's no longer an abstract threat, since it'll be before the high court one week after the election. Democrats will be looking to Harris to make that case in a way that galvanizes voters to support her ticket and those of Democrats in all the down-ballot races.