Kamala Harris, Alexandria Ocasio-Cortez team up on bill to help those with criminal records get housing 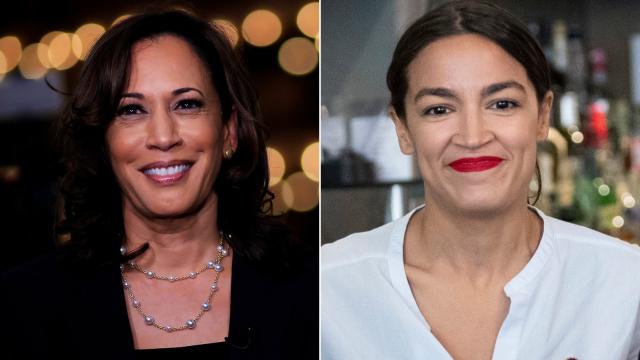 The bill, which the lawmakers will introduce Wednesday in their respective chambers, pledges to change eviction and screening policies in housing so people with a criminal history can apply for federal housing assistance.

Harris is the latest 2020 Democratic presidential candidate to attach her name to the star of the progressive left, entering the so-called AOC primary.

Vermont Sen. Bernie Sanders teamed up with Ocasio-Cortez to campaign for progressive candidates in 2018 after she upset the Democratic incumbent in her congressional primary. They have also co-sponsored legislation; on Tuesday, the pair, along with Oregon's Rep. Earl Blumenauer, rolled out a resolution to declare climate change a national emergency.

Massachusetts Sen. Elizabeth Warren has paired with the New York congresswoman on a number of platforms, from legislation to a video deconstructing the last season of HBO's "Game of Thrones." Warren and Ocasio-Cortez have also had private lunches together.

Ocasio-Cortez, herself, name-dropped both left-leaning senators in a CNN interview in May.

"What I would like to see in a presidential candidate is one that has a coherent worldview and logic from which all these policy proposals are coming forward," Ocasio-Cortez told CNN. "I think Sen. Sanders has that. I also think Sen. Warren has that. I also want to see us centering working people in the United States to stem income inequality (and) tackle climate change.

Now Harris -- who has called herself a "progressive prosecutor" -- is wading into the circle angling for support from Ocasio-Cortez and signaling her ability to work with those on the left.

Citing the effect the war on drugs had on mass incarceration, the Fair Chance at Housing Act of 2019 bill says it would ban blanket "one-strike" policies that allow eviction after a single incident of criminal activity and replace it with a review system.

It would also ban "no-fault" policies that evict entire family units when there's been an offense committed by a guest of the household, without their knowledge, and provide an addition $100 million in bonus funding for homeless service providers through the Continuum of Care program to serve ex-offenders. among other reforms.

In a statement, Harris said, "Too many people become involved in our criminal justice system and serve their time only to return home to face additional barriers to employment, education, and housing."

She added, "As our country continues working toward much-needed reform of our criminal justice system, I am proud to work with Congresswoman Ocasio-Cortez to ensure formerly incarcerated individuals and their families have access to safe and affordable housing as they transition back into their community. By requiring a higher standard of evidence and a more holistic review process, we are taking a significant step toward giving Americans a fair chance to succeed."

Ocasio-Cortez said in a statement: "I am proud to join Senator Harris in introducing the Fair Chance at Housing Act. This legislation is one of many steps that need to be taken to repair our broken criminal justice system,"

Harris has walked a narrow path of calling her career as a prosecutor both progressive and one that did not hesitate to put rapists and murderers behind bars.

"I think it's smart for Harris to show she's teaming up with (Ocasio-Cortez) and that they can work together well," said Katz, who advised New York's Cynthia Nixon in a primary challenge against Gov. Andrew Cuomo last year.

She added, "You know, both are real fighters. This is an issue that needs addressing and they're out there addressing it. This is what leadership is."

The rollout comes as the senator enjoys a new bump in polling, following her breakout moment in the first Democratic debate, during which she sparred with former Vice President Joe Biden over comments he made about being civil and working with segregationist senators and his past opposition to federally mandated busing.

For his part, Biden has shied away from association with Ocasio-Cortez.

Last week, the front-runner in the 2020 Democratic field told CNN's Chris Cuomo that Ocasio-Cortez is "brilliant and bright," but said she did not represent Democrats who can win a general election in a competitive district or state.