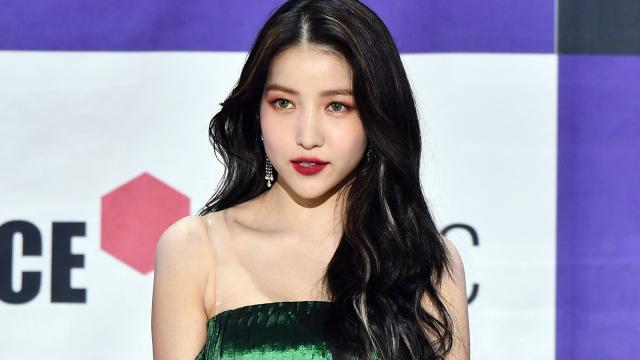 CNN — K-pop star Sowon has apologized via her management team after posting photos of herself posing with a mannequin dressed as a Nazi soldier on her Instagram page.

Sowon, who is a member of girl group GFriend, deleted the post "when she understood the significance of the image," according to a statement from Source Music, published Monday.

Sowon was "very shocked and immediately deleted the image," the company said.

"She is pained and feels deep responsibility for posting such image," read the post.

The photos were taken in November, when GFriend were filming at a cafe, Source Music said.

Staff "did not sense an issue with the outfit on a mannequin" and stills from the shoot were made available for use Sunday, it said.

"We want to apologize for not being able to check for inappropriate props in the set and not being able to thoroughly filter them during the shoot and uploading and failing to give detailed attention to historical facts and linked social issues," the company said. "We bow our head in apology for causing offense through the video and stills."

Some social media users criticized Sowon for her post.

"Nazis are not friends or someone you can hug or look so lovingly at, they are killers, they killed 6 million jews out of them 1.5 million jewish children," one Twitter user wrote.

However, many Korean fans defended the singer.

"Honestly unless you have interest in world history, most Koreans wouldn't notice it. But she's a public figure and it's true she was careless," wrote one. "It just warrants a bit of criticism and an apology and don't do it again. That's it."

Sowon has more than 800,000 followers on Instagram. She is the oldest of six members of GFriend, which won the MTV Europe music award in 2017 for best Korean act.

The center alleged that the popular K-pop group had posed in hats displaying the death's head symbol of the SS -- the organization that oversaw the Nazi concentration camps.

Big Hit Entertainment later offered its "sincere apologies" for "inadvertently inflicting pain and distress to anyone affected" by the group's choice of clothing.