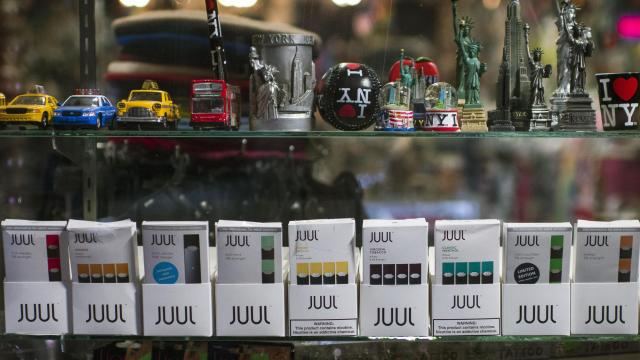 WASHINGTON — Facing mounting government pressure and a public backlash over an epidemic of teenage vaping, Juul Labs announced on Tuesday that it would suspend sales of most of its flavored e-cigarette pods in retail stores and would discontinue its social media promotions.

The decision by the San Francisco-based company, which has more than 70 percent of the e-cigarette market share in the United States, is the most significant sign of retrenchment by an industry that set out to offer devices to help smokers quit but now shoulders blame for a new public health problem: nicotine addiction among nonsmoking teens.

Juul’s announcement effectively undercut the Food and Drug Administration’s plan to unveil a series of measures aimed at curbing teenage vaping. The agency is expected later this week to announce a ban on sales of flavored e-cigarettes in convenience stores and gas stations and strengthen the requirements for age verification of online sales of e-cigarettes.

To prevent some users from reverting to menthol cigarettes, Juul said, it will keep mint, tobacco and menthol flavors for its devices in retail stores.

In recent months, the FDA has mounted an increasingly aggressive campaign against the major manufacturers of vaping products that appeal to young people, focusing particularly on Juul. The company’s sleek device (nicknamed the iPhone of e-cigarettes) resembles a flash drive and comes with flavor pods like crème and mango, leading public health officials to criticize the company and others for appearing to market directly to teenagers, who are especially vulnerable to nicotine addiction.

E-cigarettes were originally developed to help smokers quit by giving them a way to satisfy their nicotine cravings without the tar and deadly carcinogens that come with burning tobacco.

“Our intent was never to have youth use Juul,” said Kevin Burns, chief executive of Juul Labs, in a statement emailed to reporters. “But intent is not enough. The numbers are what matter, and the numbers tell us underage use of e-cigarettes is a problem.”

But critics and public health advocates said the company had no choice, especially after the FDA seized documents related to marketing strategies from the company’s headquarters last month, and while some states were investigating whether its tactics were directly aimed at minors.

Caroline Renzulli, a spokeswoman for the Campaign for Tobacco-Free Kids, called Juul’s announcement too little too late. “Juul’s social media marketing fueled its popularity with kids,” she said. “Now that it has captured 75 percent of the e-cigarette market, Juul no longer needs to do social media marketing because its young customers are doing it for them.”

Maura Healey, the attorney general for Massachusetts, echoed that sentiment. “Unfortunately, much of the damage has already been done,” she said. “Our investigation into Juul’s practices, including if it was knowingly selling and marketing its products to young people, will continue.”

In a tweet Tuesday afternoon, Dr. Scott Gottlieb, commissioner of the FDA, said: “Voluntary action is no substitute for regulatory steps #FDA will soon take. But we want to recognize actions by Juul today and urge all manufacturers to immediately implement steps to start reversing these trends.”

The FDA acknowledged earlier this year that it had been caught off-guard by the soaring popularity of vaping among minors. It also began targeting retail outlets that were selling them the products. In September, it gave Juul and manufacturers of a few other flavored e-cigarettes and vaping products 60 days to submit plans to prove they could keep them away from minors. That deadline passed this past weekend.

More than 3 million middle and high school students reported using e-cigarettes, according to preliminary unpublished government data, with about one-third of them saying the flavors were a big factor in their choice.

Burns, the Juul executive, said that as of Tuesday, the company would stop accepting retail orders for mango, fruit, crème and cucumber Juul pods. Those account for about 45 percent of retail sales for the $16 billion company, according to some estimates.

Lower in the announcement, the company said it would renew sales of those products at retail outlets that invested in age-verification technology. A timetable for resuming those sales was not announced.

Juul also said it would improve its online age-verification system to ensure buyers are 21 or older. By the end of the year, Burns said, Juul will add a real-time photo requirement to match a buyer’s face against an uploaded government-issued ID. The company will also try to prevent bulk shipments to people who are distributing to minors, by restricting customers to two devices and 15 pod packages per month, and no more than 10 devices per year.

In addition, Juul said it would shut down its Facebook and Instagram accounts in the United States that promoted use of the flavored pods. According to its release, the company said it would ask the major social media companies, including Twitter and Snapchat, to help them “police” posts that promote the use of e-cigarettes or cigarettes by underage users.

Gottlieb, the FDA commissioner, said earlier that officials had met with several e-cigarette and tobacco companies to discuss ways to reduce youth vaping after threatening to take e-cigarettes off the market if the companies could not curb teenage sales.

Some companies have indicated they would heed the FDA’s warnings. In October, Altria said it would discontinue most of its flavored e-cigarettes and stop selling some brands entirely. For the first time, the tobacco giant also said it would support a law raising the age to 21 for the purchase of all tobacco and vaping products, a proposal it had previously resisted.

R.J. Reynolds Tobacco Co., a subsidiary of British American Tobacco, also submitted plans to the FDA on Friday that backed the higher age limit. Michael Shannon, a spokesman for R.J. Reynolds, said the company had agreed not to market products through social media influencers and would require age-verification for access to the website where it sells the e-cigarette VUSE.

The company stopped short of promising to take Vuse, which comes in berry and other flavors, out of retail stores, but Shannon said the company would enforce contractual penalties for retailers that sell tobacco products to youths. In addition, it plans to start a mystery shopping program to check compliance.

On Tuesday, CNBC reported that Fontem Ventures, a unit of Imperial Tobacco Group, would raise the minimum age to buy pods on its website to 21. The company sells blu e-cigarettes, which come in various fruity flavors.

Since it came on the market in 2015, Juul has become all but irresistible to teenagers, who had been drilled since preschool days on the perils of cigarette smoking. The name itself sounded like a mash-up of “jewel” and “cool.” Unlike the clunky older vapes, the compact device could readily evade detection from parents and teachers. It not only looked like a flash drive, it could be recharged in a computer’s USB port. The flavors were both alluring and sophisticated. And it offered a way for teenagers to rebel and appear hip, seemingly without causing cancer.

And so Juul became a fast, furious hit among high school and even middle school students. A comprehensive report on e-cigarettes in January by the National Academies of Sciences, Engineering and Medicine noted that 11 percent of all high school students, or nearly 1.7 million, had vaped within the last month. Preliminary unpublished federal data estimates that number is now at least 3 million. By now, students have their own vocabulary built around Juul — “juuling” has become a verb.

Schools around the country were caught unaware. The aerosol mist from Juul is nearly odorless and dissipates within seconds. Students began juuling as teachers’ backs were turned. They filled school bathrooms for juuling breaks. And for all that school officials knew, students were just diligently recharging flash drives on laptops.

Within 18 months of Juul’s release, school officials began confiscating devices and providing information sessions to parents. They had two paramount concerns: the increasing use of Juul and other vapes for marijuana and the amount of nicotine in Juul’s pods. Nicotine, the naturally occurring chemical in tobacco, is the addictive element that binds smokers to cigarettes and vapers to Juul and other e-cigarettes. Teenagers, whose brains are still developing, need less exposure to nicotine than do adults in order to become addicted.

But perhaps most worrisome was a conclusion reached by the National Academies: that teenagers who use the devices may be at higher risk for cigarette smoking. In its announcement Tuesday, Juul emphasized its product’s use among adults as an alternative to cigarette smoking and said it would continue to post testimonials on YouTube of adults who had switched to Juul from traditional cigarettes.

Later this week, the FDA is expected to propose a ban on sales of flavored e-cigarettes, with a few exceptions; a pursuit of a ban on menthol cigarettes, which could take years to go into effect; and stricter controls of online sales to prohibit minors from accessing the products.