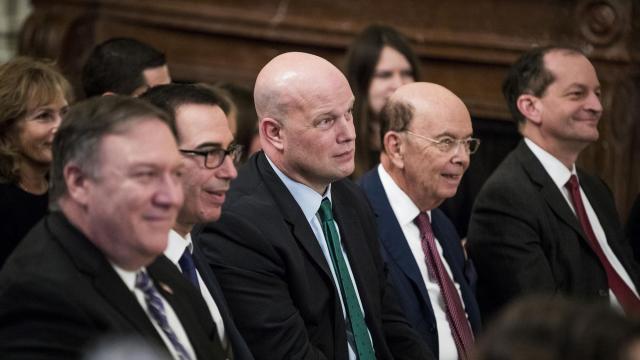 WASHINGTON — The Supreme Court was asked on Friday to decide whether President Donald Trump acted lawfully in appointing Matthew Whitaker to be acting attorney general. The court also agreed to decide what evidence may be used in a challenge to the addition of a question concerning citizenship to the 2020 census.

The request for a ruling on Whitaker’s appointment came in the unusual context of a pending Second Amendment challenge to a federal law banning gun ownership by people convicted of felonies. Lawyers for Barry Michaels, who was convicted of securities fraud in 1998 and wants to buy a gun, filed a motion asking the justices to rename his case.

It had earlier been called Michaels v. Sessions, and it was renamed Michaels v. Whitaker after Whitaker was appointed to succeed Attorney General Jeff Sessions, who resigned under pressure Nov. 7.

Such substitutions of government officials sued in their official capacities in court cases are ordinarily automatic. It would be unusual for the Supreme Court to rule on a substantial constitutional and statutory question in such a context.

Michaels asked the Supreme Court to call the case Michaels v. Rosenstein, arguing that Deputy Attorney General Rod Rosenstein is the rightful acting attorney general because Whitaker’s appointment violated federal statutes and the Constitution. Legal scholars are divided on whether Whitaker’s appointment was lawful. On Wednesday, the Justice Department’s Office of Legal Counsel said it was.

The answer to the question, whether resolved in Michaels’ case or in another setting, may be important to the fate of Robert Mueller’s investigation of Russian interference in the 2016 election, which had been supervised by Rosenstein and has passed to Whitaker, who has been critical of it.

Michaels’ lawyers include Thomas C. Goldstein, a prominent Supreme Court litigator. He wrote that prompt action by the court was warranted.

“Every day, Mr. Whitaker would presently be expected to take a number of significant official acts, including appointing immigration judges, authorizing national security warrants, determining not to enforce federal statutes on the ground that they are unconstitutional, approving or withdrawing regulations, and overseeing the investigation of Special Counsel Robert Mueller,” Goldstein wrote.

“If this court declines to resolve this question immediately and instead determines several months in the future that Whitaker’s appointment was always invalid,” Goldstein added, “then ‘unwinding’ all of those personal orders would be a fraught and disruptive exercise that could embroil the federal courts in innumerable collateral disputes.”

The Supreme Court’s action in the census case, In re Department of Commerce, No. 18-557, was unusual, too. The court had earlier turned down an emergency application from the Trump administration to halt the trial in the case, which is now largely complete, though it did grant a separate application to block the deposition of Wilbur Ross, the commerce secretary, who oversees the Census Bureau.

The justices put the new appeal on a relatively fast track, scheduling arguments for Feb. 19. It is not clear whether the judge in the case, Jesse M. Furman of U.S. District Court in Manhattan, will defer ruling in the meantime.

The Supreme Court’s new action does not concern the central question in the case: whether the addition of the question was lawful. Instead, the administration for now has asked the justices only to bar consideration of some kinds of evidence from outside the official administrative record, notably that of Ross’ motive in adding the question.

The challengers in the case — New York, other states, localities and advocacy groups — said that asking the citizenship question was a calculated effort by the administration to discriminate against immigrants. Ross’ shifting explanations for adding the question, they said, pointed to a political motive.