Justice Ruth Bader Ginsburg Treated for Tumor on Her Pancreas 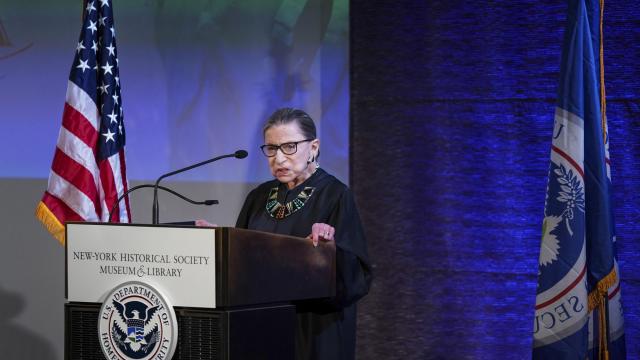 Justice Ruth Bader Ginsburg underwent treatment for a malignant tumor discovered on her pancreas, according to a news release issued by the Supreme Court on Friday.

“The tumor was treated definitively, and there is no evidence of disease elsewhere in the body,” the statement said.

The abnormality was first discovered in early July after a routine blood test, according to the statement. A biopsy conducted July 31 at Memorial Sloan Kettering Cancer Center in New York City confirmed a localized malignant tumor.

“Justice Ginsburg will continue to have periodic blood tests and scans,” the statement said. “No further treatment is needed at this time.”

The health of the 86-year-old justice, the senior member of the court’s four-member liberal wing, has been a subject of concern.

In December, surgeons removed two malignant nodules from Ginsburg’s left lung. The court described that surgery as successful and said then that she was cancer-free. After missing two weeks of arguments in January, she returned to work in February.

Ginsburg also had surgery in 2009 for early-stage pancreatic cancer.

She was also treated for colon cancer in 1999, but she did not miss a day on the bench.

Last month, in an interview with NPR, Ginsberg dismissed concerns about her health by recalling a long-ago comment from a senator.

“There was a senator, I think it was after my pancreatic cancer, who announced with great glee that I was going to be dead within six months,” she said. “That senator, whose name I have forgotten, is now himself dead, and I am very much alive.”

Ginsberg’s career as the second female justice appointed to the Supreme Court, and her overall fortitude, have inspired books (“Notorious RBG: The Life and Times of Ruth Bader Ginsburg”), a major motion picture, a documentary and merchandise, including a pin resembling the collar she wears when writing a dissenting opinion.

Ginsburg has repeatedly vowed to stay on the court as long she is of sound mind and body. In a 2013 interview with The New York Times, she said she loved her work and intended to continue “as long as I can do the job full-steam, and that, at my age, is not predictable.”

Some 56,770 Americans will be diagnosed with pancreatic cancer in 2019; about 45,750 will die of it, according to the American Cancer Society.

For three weeks this August, Ginsberg underwent focused radiation treatment, and a bile duct stent was placed, according to the court’s statement.

Dr. Diane Simeone, director of pancreatic cancer at NYU Langone’s Perlmutter Cancer Center, said the preferred treatment for a localized tumor is surgery to remove it, but said she was not familiar with the details of this particular case. Radiation “is not typically given as first-line treatment for a newly diagnosed pancreatic cancer,” she said.

“The question is: Where does this fit in the big picture?” Simeone said. “She had a pancreatic cancer resectioned about a decade ago. Is this a second primary tumor? Is this a local recurrence? Those are things that are unclear from the information we have today.”

Though pancreatic cancer has a reputation as an aggressive and fast-moving disease, Simeone said some subtypes are indolent and slow-growing. Some of them have a tendency to spread to the lungs and might have been implicated in the justice’s lung cancer.

“It’s hard to know the prognosis without knowing the true extent of the tumor,” she said. Radiation can be effective for local control but “it’s often not curative,” she said.

Other justices have had cancer while serving on the bench. In 1992, Justice John Paul Stevens underwent radiation treatment for prostate cancer. Chief Justice William Rehnquist’s thyroid cancer was diagnosed 11 months before his death in September 2005.

Aside from canceling an annual visit to Santa Fe, New Mexico, Ginsburg has otherwise maintained an active schedule this summer, the statement said. The State University of New York at Buffalo said in a statement on Friday that it had received confirmation that she would visit on Monday as scheduled.