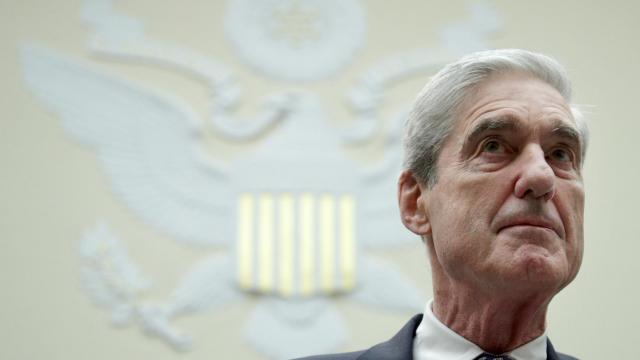 CNN — Special counsel Robert Mueller examined whether President Donald Trump lied to him in written answers during the Russia investigation, a possibility House Democrats have said they continue to look into even after Trump's impeachment.

That revelation comes from sections of Mueller's final investigative report largely related to the 2016 election efforts of convicted former Trump adviser Roger Stone that the Justice Department unveiled on Friday.

Mueller documented how Trump responded to him in written questions that he hadn't remembered discussing WikiLeaks with Stone. He also found that Trump had had conversations with Stone and others about WikiLeaks, the newly unsealed report says.

"(Michael) Cohen recalled a conversation in which Roger Stone told Trump that WikiLeaks planned to release information soon, and Manafort recalled that Trump had asked him to stay in touch with Stone about WikiLeaks," the report says.

"It is possible that, by the time the President submitted his written answers two years after the relevant events had occurred, he no longer had clear recollections of his discussions with Stone or his knowledge of Stone's asserted communications with WikiLeaks. But the President's conduct could also be viewed as reflecting his awareness that Stone could provide evidence that would run counter to the President's denials and would link the President to Stone's efforts to reach out to WikiLeaks," Mueller wrote, analyzing whether Trump had obstructed justice related to Stone.

The re-release of the Mueller report on Friday comes 15 months after Mueller first handed it to the Justice Department for Attorney General William Barr to release, and several months after Stone's trial revealed details in the report that had been kept confidential.

Many of the details about Stone had been kept under wraps until his trial last year for lying to Congress, witness tampering and obstruction, for which a jury found him guilty on all seven counts. Prosecutors said Stone had lied to the Republican-led House of Representatives in 2017 to protect Trump.

The revelations at Stone's trial last year illustrated just how involved the President was in encouraging his campaign's interest in foreign interference.

Notably, the trial revealed the details of a much-discussed part of the Mueller report about Stone --specifically what Trump had said to him regarding election interference during a car ride to LaGuardia Airport.

There's no proof that Trump's campaign illegally conspired with suspected Russian hackers, but Trump's former deputy campaign chairman Rick Gates testified about the July 2016 conversation between Trump and Stone, apparently about what WikiLeaks had lined up for the autumn, ahead of the general election.

"After Mr. Trump got off the phone with Mr. Stone, what did Mr. Trump say?" prosecutor Aaron Zelinsky asked Gates.

"He indicated more information would be coming," Gates replied.

"It was, in a way, a gift that we had not sought, but was coming out," Gates added about the WikiLeaks releases during the latter half of the campaign.

Gates and former Trump top adviser Steve Bannon emphasized in their testimony at Stone's trial the campaign's enthusiasm about Russian hacks and leaks of documents to WikiLeaks dating back to April 2016. News of the hacks first broke in June 2016, and WikiLeaks started dumping the stolen documents in July 2016, on the eve of the Democratic National Convention.

Still, Barr announced after reviewing Mueller's report he "did not find" that any Trump campaign associates coordinated with Russian interference in the election. When Barr released the 448-page report in April 2019, it carried extensive redactions. Many were marked redacted because they could cause harm to an ongoing matter -- such as Stone's trial, which was slated for later that year.

The release Friday comes after a transparency group, the Electronic Privacy Information Center, pushed for the re-release of the report in court. The federal judge overseeing the case has called Barr's spin of the findings a "calculated attempt" to help Trump politically.

Despite the testimony of top Trump aides, Barr's approach to the findings has allowed Trump to proclaim "No collusion" and "no obstruction."

The President has come to Stone's defense following his conviction for lying to Congress about his campaign-time efforts, and Stone is publicly pushing for a presidential pardon before he is set to report to prison June 30 to serve a 40-month sentence.