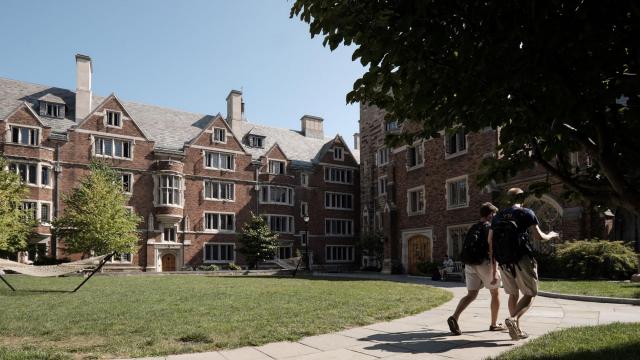 CNN — The Justice Department accused Yale University of discriminating against Asian American and White applicants in its undergraduate admissions process.

"Yale rejects scores of Asian American and white applicants each year based on their race," disfavoring applicants from those races compared to African American applicants with similar academic credentials, the Justice Department alleged in a statement Thursday.

The announcement, the culmination of a two-year civil rights investigation spurred by a complaint by Asian-American groups, represents the latest move by the Trump administration to undermine affirmative action policies that have bolstered diversity within higher education for decades.

The school's admissions process, the Justice Department said, is a violation of the 1964 Civil Rights Act, and Yale must stop the use of race or national origin in its upcoming admissions cycle or get sign-off on a plan that continues to use it from the department, officials told the school.

In a statement, a Yale spokeswoman said the school "categorically denies this allegation" and called it a "meritless" and "hasty" determination.

Yale said that they have provided the Justice Department with "a substantial amount of information and data" so far but had been unable to provide all of the information that the department had requested ahead of Thursday's conclusion, which was shared with the university in a letter earlier in the day.

"Had the Department fully received and fairly weighed this information, it would have concluded that Yale's practices absolutely comply with decades of Supreme Court precedent," said Karen Peart, the school's director of university media relations, adding that the school would not change its policy.

The Supreme Court has long upheld campus affirmative action, permitting universities to consider the race of an applicant among many factors, toward the goal of greater campus diversity, and forbidding racial quotas in admissions.

A federal judge in Boston last year upheld a similar challenge brought by an Asian American student group against Harvard, determining that while Harvard's admissions process is "not perfect," she would not "dismantle a very fine admissions program that passes constitutional muster, solely because it could do better." The student group has appealed that decision.

The Trump administration submitted a "statement of interest" in the Harvard case, siding with the student challengers and noting that the administration was investigating Harvard's screening processes after complaints to the Department of Education from more than 60 Asian-American groups. The Obama administration had fielded and rejected similar complaints.