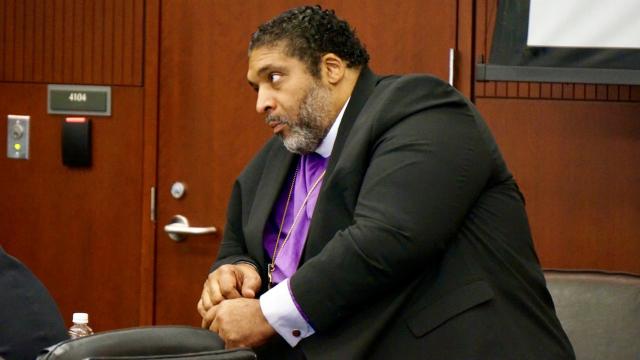 Raleigh, N.C. — Former state NAACP leader Rev. William Barber led supporters in a deafening call-and-response protest in the hallways of the legislature and refused to stop or leave the building, so he was arrested, authorities testified Wednesday.

Barber is charged with second-degree trespassing for his role in the May 30, 2017, protest calling for Medicaid expansion. He calls the arrest unconstitutional and wants a jury to decide.

General Assembly Police Capt. Wes Stiltner walked jurors through video of the protest for much of Wednesday afternoon, pointing out various locations and actions at the request of Wake County Assistant District Attorney Nishma Patel and defense attorney John McWilliam.

"We shall not be moved," was one of several phrases Barber and others repeatedly yelled out as they sat outside the office of Senate President Pro Tem Phil Berger.

"It was loud," Stiltner said in an understatement.

The noise prompted complaints from legislative staffers, General Assembly Police Chief Martin Brock said, so he started issuing warnings – he had to use a bullhorn to be heard – that protesters faced arrest if they didn't quiet down or move from the area.

"[Barber] was yelling ... to the top of his lungs or his ability. He was screaming the chants, and the people were yelling them back," Brock testified. "At times, the crowd was so loud, they would drown out me asking him to lower their voices by bullhorn."

Barber had hyped a mass rally and sit-in on social media in the days leading up to the protest, Brock said, so he and his officers were prepared for numerous arrests. Officers tracked the group as they sang in front of the building and delivered speeches outside the House chamber, he said, but there was no reason to arrest anyone until they staged a sit-in outside Berger's office.

"You can't stop a group from entering because you believe there might be a disruption," he testified.

Only after the noise complaints started rolling and the protesters refused to stop, Brock said, did he call for Stiltner and other officers to start making arrests.

"Now it's readily apparent that they're not going to, A or B, lower their voices or move, so captain then goes and tells them [individually], 'Leave the building, or you're going to be placed under arrest,'" Brock testified.

"At any time, had Rev. Barber, A, stopped yelling and screaming, or B, had from from in front of the pro tem's door, he would have been able to remain," he added.

McWilliam has argued that Barber's arrest violated his free speech rights and his ability to "instruct" his legislative representatives, as allowed under the state constitution.

After authorities noted that the arrests were carried out during normal business hours, when the Legislative Building is open to the public, McWilliam pressed Brock on whether he could legally arrest anyone because of what they were saying.

The prosecution is expected to wrap up its case Thursday, and Barber could then take the stand in his defense.

Barber has since moved on from the NAACP to lead a national nonprofit advocacy group. But he still makes frequent appearances in Raleigh at events like last month's teacher rally and minimum-wage protests.

Following his arrest, he was banned from going inside the Legislative Building as a condition of his release from jail. But a judge ended that ban in April.