Judges say NC congressional district map no good for 2020; primaries could be delayed 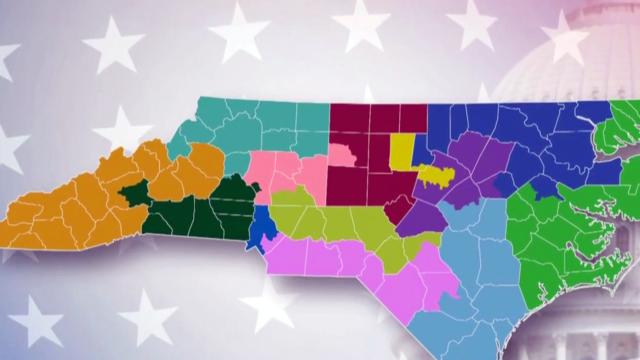 Raleigh, N.C. — North Carolina's March primaries could be pushed back by a Monday court ruling blocking the use a congressional district map being challenged as unconstitutional.

The congressional map was drawn in 2016 after an earlier one was tossed by federal courts for including racially gerrymandered districts. One of the criteria the Republican majority gave to their map-maker, the late Tom Hofeller, required him to draw districts that protected the GOP's 10-3 advantage in the state's congressional delegation.

Hofeller did so, and House Redistricting committee Chairman David Lewis, R-Harnett, famously announced that the map would elect 10 Republicans because he didn't think it could be drawn to elect 11.

After the U.S. Supreme Court declined to condone or condemn partisan map-making in a June ruling and kicked the issue back to the states, a group of voters, backed by the National Redistricting Foundation, a nonprofit affiliated with former U.S. Attorney General Eric Holder, filed suit, alleging that the overly partisan map violated the North Carolina constitution's guarantees of free elections, free speech, freedom of assembly and equal protection.

A three-judge panel ruled Monday that the plaintiffs would likely win their challenge at trial, so they issued an injunction against using the 2016 congressional district map in the 2020 elections.

"The loss to plaintiffs' fundamental rights guaranteed by the North Carolina Constitution will undoubtedly be irreparable if congressional elections are allowed to proceed under the 2016 congressional districts," the judges wrote in their 20-page ruling. "Simply put, the people of our state will lose the opportunity to participate in congressional elections conducted freely and honestly to ascertain, fairly and truthfully, the will of the people."

Bob Phillips, executive director of Common Cause North Carolina, which has challenged state voting maps before, called the ruling "a welcome victory" for voters.

"We hope it is a sign that the state’s egregiously gerrymandered congressional districts will ultimately be struck down and redrawn to be completely free from partisan gerrymandering," Phillips said in a statement. "Partisan gerrymandering violates the constitutional rights of North Carolina voters, and it must end."

Filing for the March primaries was to be held in December, and state lawmakers and U.S. Reps. Virginia Foxx, Richard Hudson and Ted Budd had asked that the primaries be held in March so as not to confuse voters. But the judges determined the harm to voters overall was too great to proceed as scheduled, noting that they could delay all of the March primaries statewide until the court case over the congressional districts is resolved to ensure valid elections.

But the judges noted that lawmakers could pre-empt the need for a trial in the case and possibly keep the 2020 elections on schedule by quickly redrawing the congressional map to eliminate the partisan tilt to it.

"The court does not presume, at this early stage of litigation, to have any authority to compel the General Assembly to commence a process of enacting new congressional districts," the judges wrote. "The General Assembly, however, has recently shown it has the capacity to enact new legislative districts in a short amount of time in a transparent and bipartisan manner."

Lawmakers were given about two weeks to redraw the districts in September, and they used lottery ball machines to help whittle down hundreds of maps created by an algorithm that were submitted as evidence during the trial to base maps of House and Senate districts that they then tweaked before approving them and submitting them to the court for review.

The judges signed off on those maps in a separate order Monday, praising the transparent and nonpartisan methods used and dismissing complaints by plaintiffs as to some of the procedure and some of the resulting House districts.

"The bipartisan process that we used to create new districts was the most transparent in history. Every effort was made to work together with our Democratic colleagues to create fair, nonpartisan and court-compliant districts," Sen. Warren Daniel, R-Burke, co-chairman of the Senate Redistricting and Elections committee, said in a statement. "I am glad that the court recognized that and approved the new Senate and House districts. I hope we can now finally put this long, absurd, partisan court battle behind us."

Lewis said legislative leaders are reviewing the court's injunction in the congressional map case and haven't yet determined whether to take up a redraw in the coming weeks. Senate President Pro Tem Phil Berger said it's possible the legislature will act before the case moves into the next phase, but that decision hasn't been made.