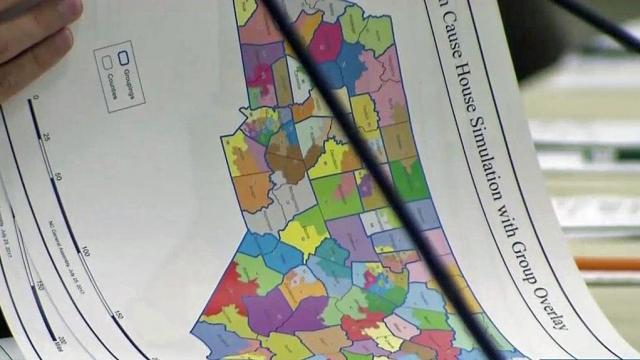 Raleigh, N.C. — A three-judge panel ordered another redraw for North Carolina's legislative maps Tuesday, finding them overly partisan in a closely watched case based on the state constitution.

In a unanimous ruling, the judges said House and Senate maps "are significantly tainted" and "do not permit voters to freely choose their representative, but rather representatives are choosing voters based upon sophisticated partisan sorting."

The Senate's top Republican leader said in a statement that legislators will not appeal and that the General Assembly will begin working on a nonpartisan map.

The court gave the Republican-controlled legislature two weeks to redraw nearly half the districts in North Carolina's House and Senate, and the judges ordered the body to do so only during public hearings, with computer screens used in the process visible to the public.

In an order posted Tuesday, the court found that:

The ruling in Common Cause v. Lewis represents a victory for Democrats in North Carolina, who hope to pick up seats, and a win in the larger national fight over partisan gerrymandering.

A separate North Carolina case at the federal level failed to strike down the practice, and reformers hope to have better luck in the state courts around the country. North Carolina's constitution is one of several with more explicit language than the U.S. Constitution, which was important in the case.

Senate President Pro Tem Phil Berger said in a statement Tuesday evening that he and other Republicans disagree with the ruling and that it contradicts the constitution and legal precedent, but it's time to "finally put this divisive battle behind us."

"Nearly a decade of relentless litigation has strained the legitimacy of this state’s institutions, and the relationship between its leaders, to the breaking point," Berger, R-Rockingham, said in the statement. "It’s time to move on."

Common Cause North Carolina Executive Director Bob Phillips called the decision "a historic victory for the people of North Carolina."

In their order, Superior Court judges Paul Ridgeway of Wake County, Joseph Crosswhite of Iredell County and Alma Hinton of Halifax County said the legislature's intent was obvious, and nothing offered at trial undercut that in any meaningful way. Legislators acknowledged they used prior election results to draw maps that would be good for Republicans, and secret files admitted in this case after deceased mapmaker Thomas Hofeller's estranged daughter turned them over to Common Cause bolstered the case, the judges said.

The court was also persuaded by experts who ran simulations that predicted, among other things, that North Carolina's current maps were "more carefully crafted to favor Republicans" than 99.999% of all possible plans drawn using the nonpartisan criteria that legislative leaders said were crucial in drawing these maps.

All in all, the process violated the state constitution's Free Elections Clause and its Equal Protection Clause, the court said.

"In short, the mapmaker has made some votes count for less, because they are likely to go for the other party," the judges said.

One of the bigger arguments in the case, and in other gerrymandering cases, is whether these claims are "justiciable" – whether they are fundamentally political questions best left to the legislature or something a court should decide and whether there's any hard and fast standard the court can use to decide how much partisan map making is too much.

This court decided that, not only could it act, it had a duty to. Extreme partisan gerrymandering reflects "an effort by a legislative majority to permanently entrench themselves in power in perpetuity," the judges wrote.

"Allowing the General Assembly discretion to establish its own redistricting criteria and craft maps accordingly is what the North Carolina Constitution requires; systematically packing and cracking voters to the extent that their votes are subordinated and devalued for no legitimate governmental purpose, but rather the purposes of entrenching a political party in power, is what the North Carolina Constitution forbids," they said in the order.

The court reserved the right in its order to delay next March's primaries but said that wasn't necessary at the moment. It also said that the General Assembly, in reworking district lines between now and Sept. 18, could not use the unconstitutional district lines as a starting point.

The General Assembly is on a break this week, but House Speaker Tim Moore noted before sending members home last week that they might have to come back into session early to deal with a ruling in this case. A spokesman for Moore said Tuesday evening that House leaders were digesting the 357-page ruling and would have more to say later.

Berger called the case "the next step in Eric Holder’s drive to use judges to create a Democratic majority." Holder, who served as attorney general under former President Barack Obama, heads up the National Democratic Redistricting Committee, a national effort to use the courts and other strategies to reform redistricting and produce districts where Democrats are more competitive.

It remains to be seen how much precedent the North Carolina decision sets. The court said it didn't need to decide that the legal standards in the case would apply in all future ones.

"This case is not close," the panel said. "The extreme, intentional and systematic gerrymandering of the 2017 plans runs far afoul of the legal standards set forth above, or any other conceivable legal standard that could govern plaintiffs’ constitutional claims."

The judges also said this was the third time since legislative district maps were drawn following the 2010 census that a state court has entered judgment in a gerrymandering case. The U.S. Supreme Court has ruled eight times on map challenges, they said.

"Yet, as we near the end of the decade, and with another decennial census and round of redistricting legislation ahead, the litigation rages on with little clarity or consensus," the judges wrote. "The conclusions of this court today reflect the unanimous and best efforts of the undersigned trial judges – each hailing from different geographic regions and each with differing ideological and political outlooks – to apply core constitutional principles to this complex and divisive topic."