Judges elaborate on decision to dismiss lawsuit over NC elections board 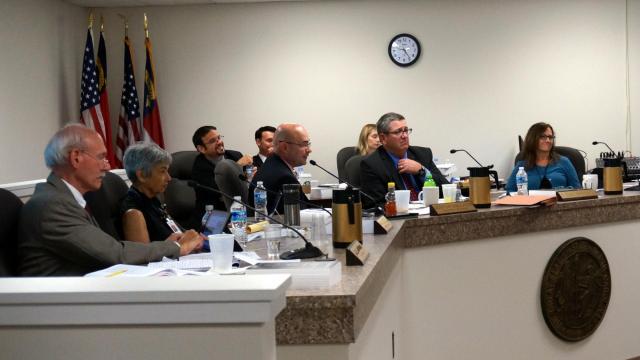 Raleigh, N.C. — A three-judge panel on Tuesday reaffirmed its decision to dismiss Gov. Roy Cooper's challenge to lawmakers' efforts to overhaul the state elections board.

The panel kicked the lawsuit to the curb in June, saying it lacked jurisdiction to settle what had become a political dispute, but the Supreme Court asked the judges to elaborate on that stance before it could address Cooper's appeal.

A legislative push to combine the State Board of Elections and the State Ethics Commission into a single eight-member board split evenly between Democrats and Republicans has been the focus of a power struggle between Cooper and Republican leaders in the General Assembly since the measure was first passed in a special session two weeks before Christmas.

The three-judge panel initially ruled with Cooper on the legality of the move, but lawmakers tweaked aspects of the merged board and gained the panel's approval for it.

"The text of the Constitution makes clear that the power to alter the functions and duties of state agencies is reserved to the Legislature through its law-making ability and to the Governor through executive order subject to review by the Legislature," the panel wrote in its order Tuesday. "This Court cannot interject itself into a balance struck in the text of a Constitution specifically dealing with the organization and structure of a state agency. The merger of the Board of Elections and Ethics Commission ... is a political question and therefore a nonjusticable issue, and that this court lacks authority to review."

Because of that, the judges said they were reluctant to address the merits of Cooper's case but did so because the Supreme Court asked them to do so.

They determined that Cooper has the authority to appoint all members of the new eight-member board and to remove any of them for cause, but speculation that the board's Democratic and Republican members would repeatedly deadlock on issues doesn't meet the standard for finding the combination unconstitutional.

"Were the Governor given the degree of control he seeks he seeks over either the Board of Elections or the Bipartisan Board in this case, neither board could continue to function as an independent regulatory and quasi-judicial agency," the judges wrote.

"The three-judge panel recognized that Governor Cooper’s demands would undermine the independence of our elections and ethics enforcement," Rep. David Lewis, R-Harnett, who chairs the House Committee on Elections and Ethics Law, said in a statement. "A Governor having the ability to completely control the members of the board that investigates his campaign and administration would make a mockery of the ethics reforms North Carolina has enacted since 2006. I’m grateful to see that this court saw through the political rhetoric and upheld the new Bipartisan Elections and Ethics Board."

"We appreciate the court’s thoughtful and well-reasoned decision rejecting Roy Cooper’s attempts to drag his political battles into the courtroom, and we encourage him to abandon taxpayer-funded lawsuits and follow the bipartisan elections and ethics board law," Senate President Pro Tem Phil Berger and House Speaker Tim Moore said in a joint statement.