Judge Says Pennsylvania Election Districts Give Republicans an Edge, But Are Not Illegal 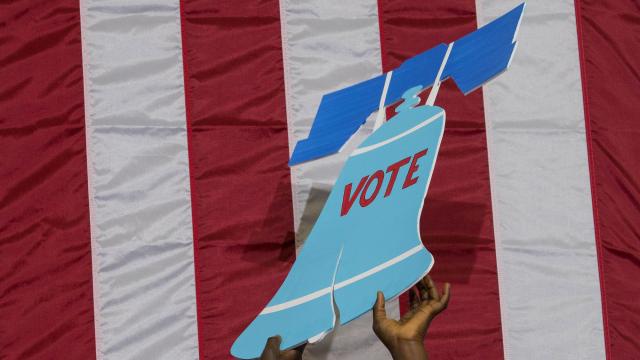 A Pennsylvania judge said Friday the state’s congressional districts were drawn to give Republicans an advantage, but they did not violate the state constitution, ruling in a high-profile gerrymandering case with the potential to have major consequences on the 2018 midterm elections.

Judge P. Kevin Brobson of Commonwealth Court in Harrisburg noted that Republicans hold 13 of 18 congressional seats in Pennsylvania, a perennial swing state that has one of the most extensively gerrymandered maps in the country. Nonetheless, the judge said that Democrats who brought suit had failed to articulate a legal “standard” for creating nonpartisan maps.

The case now goes to the Pennsylvania Supreme Court, which has agreed to fast-track it. If the court rejects Brobson’s conclusion, it could order new maps drawn in time for the 2018 midterm elections. Pennsylvania is expected to be fiercely fought terrain next year in elections turning on President Donald Trump’s popularity. Trump’s 2016 victory in the state was the first for a Republican presidential candidate since 1988, but Republicans are already worried about losing congressional seats even without new maps.

In practical terms, Brobson’s determination — in the form of a finding ordered by the state Supreme Court — is a recommendation, which the high court may affirm or reject. Five of the court’s seven justices are Democrats.

Should the state Supreme Court overturn the map, drawn by the Republican-led Legislature in 2011, and mandate new districts be redrawn on a nonpartisan or bipartisan basis, it could put perhaps half a dozen additional House seats up for grabs in November and even tip one or two seats squarely into Democratic hands. The district lines outside Philadelphia were especially drawn to favor Republicans, including the 7th District, nicknamed “Goofy Kicking Donald Duck” for its tortured shape.

But the problem for Democrats is that gerrymandering per se to gain a partisan advantage is not against state law. “Petitioners,'’ the court wrote, “have failed to meet their burden of proving that the 2011 Plan, as a piece of legislation, clearly, plainly, and palpably violates the Pennsylvania Constitution. For the judiciary, this should be the end of the inquiry.”

During a weeklong trial this month, the plaintiffs called experts to testify with the aid of computer simulations that the 2011 map was not drawn fairly. But Republicans invoked legislative privilege to refuse disclosing internal documents or testifying about how the map was drawn, one year after the 2010 census that governs redistricting in each state.

On the merits, the lawsuit resembles in many respects another that is currently before the U.S. Supreme Court, Gill v. Whitford, in which Democrats allege that Republicans in Wisconsin gerrymandered legislative districts to discriminate against Democratic voters, in violation of their equal protection and First Amendment rights.

That challenge alleges a violation of the U.S. Constitution, whereas the Pennsylvania suit is focused solely on the state constitution.

Despite the ruling, Suzanne Almeida, the executive director of the League of Women Voters of Pennsylvania, which helped bring the lawsuit, said there was much in the judge’s finding that supported the suit.

“While we are disappointed that Judge Brobson did not find that the existing state of Pennsylvania law was violated by the 2011 partisan gerrymander, we are encouraged by the strong findings of fact in our favor and look forward to the Pennsylvania Supreme Court’s ultimate decision in the case,'’ she said.

It is not entirely clear, however, that a state Supreme Court decision would be the last word in the matter. Robert J. Tucker, a lawyer representing Republican state legislative leaders, said in a recent interview that they would be testing “avenues and mechanisms of appealing to the Supreme Court” of the United States, in the event that they lose at the state level.

Pennsylvania was one of a number of states where the Republican Party put in place aggressive gerrymandering plans after the 2010 elections, when voters handed the party full control of government in swing states like Pennsylvania, Wisconsin and Michigan. But Pennsylvania Republicans lost their monopoly in 2014 with the election of Gov. Tom Wolf, a Democrat.