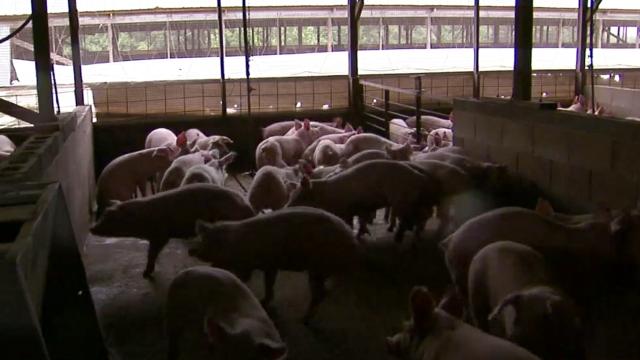 RALEIGH, N.C. — A federal judge in North Carolina shut down a lawsuit against a Smithfield Foods hog-feeding operation on Thursday before jurors who determined the company was a nuisance to neighbors could discuss punishing the pork giant.

Jurors in Raleigh determined on Wednesday that eight neighbors of a Smithfield-affiliated farm in Sampson County housing up to 7,000 swine should be compensated with between $100 and $75,000 each. Neighbors cited odors, flies and noises from the Sholar Farm.

Jurors in three related cases decided earlier that Smithfield should pay nearly $550 million in penalties, which were reduced under a state law limiting punishment.

"While we recognize that the outcome of this trial was far more favorable for our subsidiary Murphy-Brown and our industry than the three previous trials, we continue to believe these lawsuits are an abuse of our legal system and an attack on agriculture," Smithfield spokeswoman Keira Lombardo said in a statement.

Smithfield has filed motions to vacate the earlier damage awards, Lombardo said, noting "the real case about the plaintiffs and their properties was buried in an avalanche of distraction and manipulation."

State lawmakers have tried to shield the company from nuisance lawsuits in the future by limiting who can file suit suits and the circumstances under which they can be filed. Some lawmakers and state agriculture officials have called the lawsuits a threat to small farms in eastern North Carolina.