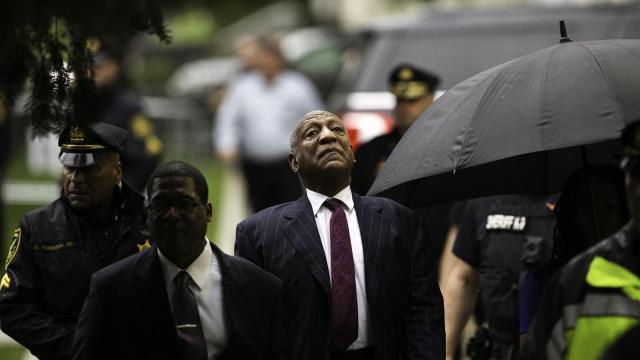 NORRISTOWN, Pa. — Bill Cosby will be sentenced here Tuesday by Judge Steven T. O’Neill, who ruled earlier in the day that Cosby qualified as a “sexually violent predator” under Pennsylvania law.

His decision came after testimony by a psychologist for the defense, who said Cosby did not deserve that classification. The expert, Timothy Foley, said Cosby was no longer a threat to anyone and he contradicted a psychologist representing Pennsylvania’s Sexual Offenders Assessment Board who testified Monday, the first day of Cosby’s sentencing hearing. That psychologist had said Cosby had demonstrated a lifetime interest in sex with nonconsenting women, which indicated a mental abnormality.

The determination of whether a defendant is a sexually violent predator can be a factor in sentencing and in the conditions imposed both in prison and afterward. Prosecutors have asked that he be sentenced to the maximum: 10 years in prison.

“I found him to be extraordinarily low risk,” Foley said.

He came to his opinion, he said, after he met with Cosby for three hours on July 18 and also after reviewing some records. He said he had read none of the trial records or depositions in the case.

M. Stewart Ryan, a prosecutor, asked whether he was aware that Cosby had admitted to getting seven prescriptions of quaaludes to give to women for sex. Foley said he was not.

Foley also said he did not know that five other women had testified at trial that they had been assaulted by Cosby.

Cosby’s lawyer, Joseph P. Green, argued Monday that Cosby’s age, 81, and the fact he is legally blind meant he was no risk, especially since there have been no new allegations of sexual abuse leveled against him since 2004.

“How’s he going to meet these people?” Green said. “There is no reasonable prospect that an 81-year-old blind man is likely to reoffend.”

But the psychologist for the state panel, Kristen F. Dudley, said she did not believe the disorder had dissipated with age. “It is possible that he has already met someone who could be a future victim,” she said.

The final decision by O’Neill upheld the board’s finding. He said the state had met “a clear and convincing standard.”

Cosby was convicted in April of drugging and assaulting Andrea Constand, a former Temple University employee to whom he had been a mentor.

Constand spoke in court Monday, along with her mother, father and sister. Constand told the judge: “The jury heard me, Mr. Cosby heard me and now all I am asking for is justice as the court sees fit.”

But Cosby told the judge Tuesday through his lawyer that he did not intend to speak before sentencing, expected Tuesday afternoon.

Cosby has denied all the accusations against him and most experts say they did not anticipate he would express remorse because his team has already announced plans to appeal his conviction.

He did answer a few procedural questions, and asked a question as prosecutors led him through list of his duties now that he will be a registered sex offender for the rest of his life. “If I went from a city to another city do I have to, even if it’s just overnight, I have to get in touch wit the state police?” he said. Ryan, the prosecutor, said he should consult his lawyer.

Nine women who have accused Cosby of similar acts of sexual abuse were in the courtroom Tuesday to watch the sentencing, including three who testified at the trial in April.