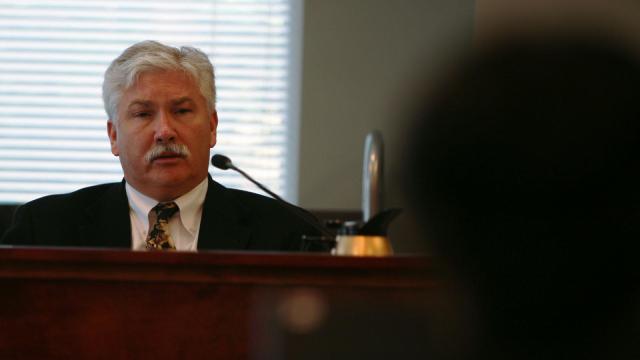 Raleigh, N.C. — Citing the unreliable testimony of a state investigator, a North Carolina judge on Friday reinstated a prison worker fired after an inmate died of thirst last year.

The decision to reverse the dismissal of Michael Youron, formerly a psychological services coordinator at Alexander Correctional Institution, marks the second time a state administrative court has reversed disciplinary actions by the Department of Public Safety following the death of Michael Anthony Kerr on March 12, 2014.

Kerr, an Army veteran who suffered from schizoaffective disorder that went untreated for at least six months, was left handcuffed for five days in isolated confinement at the Taylorsville prison, where he was serving a 31-year sentence for firing a weapon at private property and repeated felony convictions. When he was moved to Central Prison on March 12, 2014, corrections officials found Kerr dead in the back of a transfer van.

Administrative Law Judge Melissa Lassiter wrote in her decision that the state failed to prove claims that Youron did nothing to prevent Kerr's death. She also found the state investigator who examined Youron's conduct was not a credible witness due to her evasiveness on the stand.

Youron, who had a small caseload in addition to management responsibilities, was never Kerr's psychologist. He also left the facility on vacation nearly a week before Kerr died and was hospitalized with a heart condition the day prison officials found Kerr unresponsive in Raleigh.

But when the Department of Public Safety fired him for "gross inefficiency" in May 2014, prison officials wrote that Youron failed to accelerate Kerr's transfer to Central, where would have received better care. The state also claimed Youron failed to properly supervise and assist psychologist Christine Butler, Kerr's case worker, who was behind on patient documentation.

Based on the evidence presented during Youron's personnel hearing in March, Lassiter found that every one of the state's claims was either unsubstantiated or false.

Most of those claims originated in a report by Phyllis Vandiford, a retired prison administrative services manager and investigator with the DPS Professional Standards Office. On the witness stand during the hearing, Vandiford said she did not interview a number of employees in Youron's chain of command and was unaware mental health staff at the prison felt they were overworked.

Although she wrote in her report that Youron was aware Kerr was "decompensating," or declining medically, she said under questioning that she had to look up the definition on her cellphone.

"I Googled it," Vandiford said. "I wanted to know what it means."

Lassiter wrote that Vandiford became "overtly evasive" when questioned about omitting several of Youron's actions, including his instructions a week before Kerr died that the inmate should be transferred to Central Prison.

Director of Prisons George Solomon later admitted on the stand that the agency's claim that Youron didn't act to move Kerr to Central was incorrect.

"The undersigned does not find Ms. Vandiford to be a credible witness, due in significant part to her repeated instances of evasive and non-responsive answers," Lassiter wrote.

In addition to reinstatement to a similar position, Youron will also receive back pay and benefits as well as attorney's fees.

A DPS spokesperson had no comment on the judge's decision Friday. The state has the option to appeal the decision.

More than a year later after Kerr's death, no criminal charges have been filed, although the case is now before a federal grand jury.

Youron was one of 25 people who resigned or were disciplined by DPS after Kerr's death.

Youron's attorney, Michael C. Byrne, noted that his client was the second person associated with Kerr's death to be reinstated by a judge. A nursing supervisor got her job back in March. Although a judge did uphold the firing of a prison captain last year, the state has also settled with two other employees prison officials initially fired.

Another case is still pending.

Byrne, who represents several of the prison workers contesting their cases, said the reversals so far underscore the need for independent judges to review personnel decisions where state employees feel they were wrongfully dismissed. That's especially true for many of these cases, he said, which he said he finds "puzzling."

"It almost seemed like they just lined everybody up and shot at them with a shotgun filled with rock salt," Byrne said. "Whoever got hit got fired."

On the stand in March, Youron was more blunt.

"I believe DPS pretty much just looked for scapegoats,” he said. “They just wanted to find someone to blame."

CORRECTION: A previous version of this story incorrectly reported the date of Michael Kerr's death. It was March 12, 2014, not March 16, 2014.