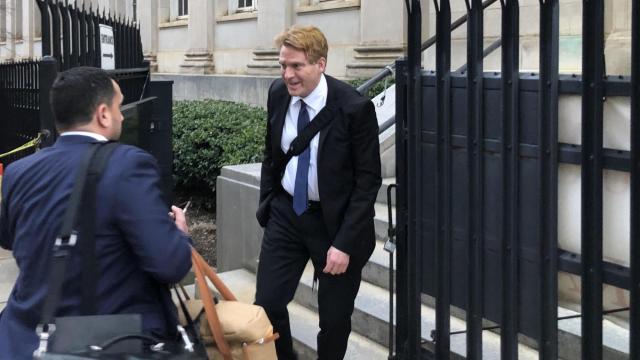 CHARLOTTE, N.C. — An insurance company magnate and major North Carolina political donor convicted on corruption-related counts months ago must begin his federal prison term next week, a judge has ruled.

U.S. District Judge Max Cogburn rejected Greg E. Lindberg's request that his active sentence be delayed to more effectively appeal his conviction and because of an elevated risk of contracting COVID-19 in prison.

Lindberg was sentenced to more than seven years in prison after being convicted in March of attempting to bribe North Carolina's insurance commissioner to secure preferential regulatory treatment for his insurance business.

Lindberg, 50, who is supposed to report Tuesday to a minimum-security prison in Montgomery, Alabama, suffers from sleep apnea, according to his motion. Lindberg will have to serve time in strict quarantine after he arrives for two weeks, his motion said.

U.S. District Judge Max Coburn rejected Lindberg's request, which the judge said would essentially keep Lindberg out of prison until a COVID-19 vaccine is made available to him.

Coburn also said sleep apnea is not listed by the Centers for Disease Control and Prevention as a medical condition that could elevate a person's risk for severe illness from COVID-19. Only one Montgomery inmate has tested positive for coronavirus, according to Federal Bureau of Prisons data.

John D. Gray, a consultant for Lindberg's company, was convicted of charges similar to Lindberg's and received a 2 1/2-year prison sentence. Gray was not in federal prison custody as of Wednesday, according to the bureau's website.