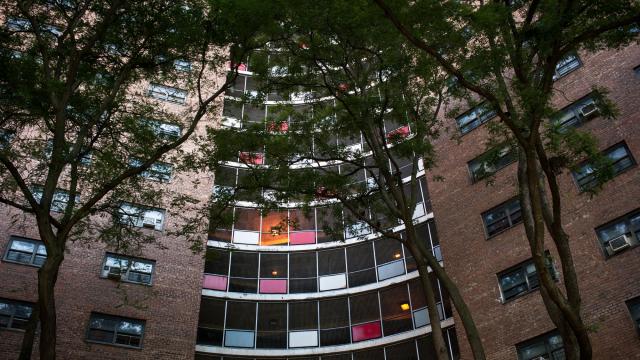 NEW YORK — A federal judge rejected a sweeping settlement on Wednesday that would have appointed a monitor to oversee the troubled New York City Housing Authority and required the city to pump at least $1.2 billion into repairs.

Judge William H. Pauley III also strongly suggested that the federal government should take over the authority instead.

In a scathing opinion, Pauley deplored the “breathtaking scope” of the squalid living conditions in the city’s public housing complexes. He rebuked the city for its mismanagement of the agency, and said the federal government had abdicated its legal responsibility to overhaul the nation’s largest stock of public housing that is home to about 400,000 vulnerable New Yorkers.

The unexpected ruling threw the future of the Housing Authority into doubt and unraveled a deal that Mayor Bill de Blasio had staked his reputation on as a champion of public housing tenants.

It marked the latest setback in a year of scandals in the public housing system, including massive heat outages, the resignation of the authority’s chairwoman and revelations about the mishandling of lead paint inspections.

The judge said he could not ignore the residents’ “harrowing accounts” of conditions and the indifference of the management of the Housing Authority, known as NYCHA.

But he said the agreement “is not fair, reasonable or consistent with the public interest.” He ordered the parties to submit a report by Dec. 14 with their positions on how to proceed.

The U.S. attorney’s office in Manhattan filed a lawsuit earlier this year accusing the Housing Authority of systematic misconduct and outright lies in the management of the authority, including failures to adequately inspect for lead paint.

Rather than fight the suit, the Housing Authority entered into the settlement, agreeing to a federal monitor who would oversee NYCHA’s compliance with federal and local regulations. For its part, the city agreed to invest at least $1.2 billion over five years to fix deteriorating buildings.

Supporters had expressed hope the agreement would salvage and transform New York City’s public housing, providing additional oversight and an infusion of cash to overhaul the decrepit living conditions in many of NYCHA’s 176,000 apartments.

The judge’s ruling dealt a political blow to de Blasio, who had inserted the city into the negotiations between the U.S. attorney and the Housing Authority and touted the settlement as a “pivotal moment for the future of public housing in New York City.”

It came just hours after de Blasio appeared on television to defend his decision to give financial incentives to Amazon as part of a deal to bring the company to Long Island City, a short walk from the nation’s largest public housing complex. The contrast seemed to underscore the income inequality that persists in the city despite the mayor’s campaign vows to change it.

Eric F. Phillips, the mayor’s spokesman, said the funding the city had committed to NYCHA as part of the settlement “will continue.”

In his opinion, Pauley questioned whether a court-appointed monitor was the right path to take. He said Congress had “expressly entrusted” the primary responsibility for saving failing public housing systems to the Department of Housing and Urban Development. The proposed settlement shifted that job to the court, he said, and in doing so may violate the separation-of-powers principle in the U.S. Constitution.

Pauley also said the settlement did not have strong enough enforcement mechanisms, calling them “formless.” The performance requirements for NYCHA, he noted, would be developed in the future by the monitor and “are not subject to the court’s approval.” The ruling followed a remarkable hearing in September, at which more than 50 tenants packed Pauley’s courtroom and gave tearful testimony about living conditions in public housing.

The judge, in his 52-page opinion, wrote that continuing disputes between the U.S. attorney’s office and NYCHA in the months after the agreement was reached suggested that the court would be left overseeing the Housing Authority indefinitely, a role, he said, “that judges are ill-equipped to assume.”

Pauley noted that HUD had in the past taken drastic measures to successfully reform other public housing authorities, taking over the Chicago Housing Authority and appointing receivers to oversee the housing agencies in Boston and Washington.

The powers of a receiver would be broader than those of the court-appointed monitor proposed in the settlement, Pauley said. Such an intervention would be unprecedented in the eight-decade history of public housing in New York City.

De Blasio had vowed in the past not to let the Housing Authority fall into receivership. “That is not something that we will allow to happen here,” de Blasio said in 2015. “Here, we will make the changes and we will make them swiftly and aggressively to ensure that we can protect our residents and the long-term strength of NYCHA.”

Geoffrey S. Berman, the U.S. attorney in Manhattan, said in a statement that his office was reviewing the judge’s decision. “The well-being of the over 400,000 NYCHA residents continues to be our paramount concern,” he said. Jereon Brown, a HUD spokesman, said the department was reviewing the opinion. “We’re fully committed to improving the health and safety of NYCHA residents,” he said.

Stanley Brezenoff, whom de Blasio appointed in April to be interim chairman of the agency, said in an interview last month that there was little appetite among HUD officials to take over NYCHA’s gargantuan 325-complex system.

“There was talk of getting HUD to appoint a receiver and they just ran like hell,” Brezenoff said. “HUD didn’t want it, which is very sensible on their part.”

Pauley noted that HUD did not have discretion to select which deficient public housing agencies “it chooses to assist.”

“To the contrary,” the judge wrote, HUD had a legislative mandate to “oversee all public housing agencies.”

Councilman Ritchie Torres, D-Bronx, who is a critic of NYCHA’s management, said of the ruling, “My concern is that public housing will continue to be in a state of flux and confusion that does a disservice to everyone.”

The Housing Authority faces the daunting task of addressing $32 billion in unmet capital needs. Those include defective boilers that have caused heat outages, and leaky roofs that have contributed to mold problems inside apartments.

Pauley said the parties may have to consider new ways to address the authority’s problems, like public-private housing partnerships, private development of unused NYCHA land or the sale of air rights.

He also raised the possibility of “even less palatable” measures, like replacing NYCHA’s management or breaking collective-bargaining agreements.