Judge Orders Evidence to Be Gathered in Emoluments Case Against Trump 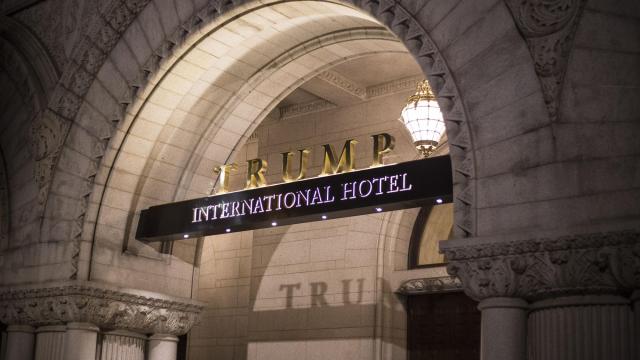 WASHINGTON — A federal judge in Maryland on Friday ordered evidence-gathering to begin in a lawsuit accusing President Donald Trump of violating the Constitution by maintaining a financial interest in his company’s Washington hotel.

The plaintiffs are seeking records that could illuminate potential conflicts of interest between Trump and foreign leaders or state officials who patronize Trump International Hotel, blocks from the White House.

The judge, Peter J. Messitte of the U.S. District Court in Greenbelt, Maryland, said the Justice Department had failed to show a compelling reason to hold up the case while its lawyers appeal his earlier rulings. He ordered the parties to come up with a timeline within 20 days to produce evidence.

The lawsuit, filed by the District of Columbia and the state of Maryland, seeks for the first time to define the meaning of constitutional language that restricts the president from accepting financial benefits, so-called emoluments.

So far, Messitte has ruled against Trump at every step. But the case is still in its early stages, and the Justice Department signaled Friday that it would seek emergency relief from a higher court rather than comply with his latest order.

“This case, which should have been dismissed, presents important questions that warrant immediate appellate review,” said Kelly Laco, a department spokeswoman.

If necessary, the president’s lawyers will ask the Supreme Court to intervene, predicted Josh Blackman, a constitutional law professor at the South Texas College of Law in Houston.

“It’s a really big deal,” he said of the plaintiff’s goal. “They want to depose the president and get his records. There are a lot of legal questions to resolve before you get there.”

The attorneys general for Maryland and the District of Columbia contend that the Trump hotel unfairly competes with convention centers and hotels in their jurisdictions. Among other documents, they are expected to seek records that reveal the identity of hotel guests who visited the White House on official business, as well as how much the president has profited. Ultimately, they could try to go after the president’s tax returns.

Messitte found earlier that the local governments had standing to sue the president, and that the emoluments clauses should be broadly interpreted as measures to protect against corruption.

The Justice Department asked for the judge’s permission to appeal his rulings and to delay discovery in the meantime. But Messitte said the department could follow the typical legal process and appeal when the case is over.

“If the president is permitted to appeal the court’s decisions in piecemeal fashion, ultimate resolution of the case could be delayed significantly, perhaps for years,” he wrote. “That, as a matter of justice, cannot be countenanced.”

The judge also dismissed the president’s argument that discovery would be unduly burdensome, noting that Trump had threatened to sue his former campaign chief and others. “The president himself appears to have had little reluctance to pursue personal litigation despite the supposed distractions it imposes upon his office,” he wrote.

Norman L. Eisen, co-counsel for the plaintiffs, said they would move speedily for discovery. But the Justice Department could move to head that off within days.

In a string of other cases, the Trump administration has aggressively fought adverse legal rulings, sometimes by bypassing the appellate courts and appealing directly to the Supreme Court for extraordinary relief.

Last week, for instance, the Supreme Court temporarily delayed a deposition of Commerce Secretary Wilbur Ross after a lower court ordered him to answer questions about why he wanted to add a citizenship question to the 2020 census. But then late Friday, the Supreme Court declined to halt a trial in that lawsuit.