Raleigh, N.C. — The officer who shot a man in east Raleigh during a chase on Tuesday evening has been with the department for seven years, Raleigh police said Thursday.

Byrd was placed on administrative leave after the shooting, per protocol, police said.

Body camera video was released Wednesday and shows the chase.

Police were called to a shopping center at North Rogers Lane and New Bern Avenue in east Raleigh at about 6:40 p.m. on a report that a group of men was loitering, at least one of them with a gun.

In a later 911 call, a person said a man had threatened the caller at a restaurant, saying, "I know your family. It's done. It's a wrap. You're done."

As police officers pulled up, the body camera shows, one man began to run. Officers chased the man, later identified as Torres, yelling at him to stop and "drop the gun."

Torres ran into the woods at the end of Rogers Lane, where another officer cut him off. On the body camera, as single shot is audible as Torres made that turn.

After he fell, Torres can be heard yelling, "I swear I’m unarmed.” Police said a handgun matching the description given by the 911 caller was found at the scene. 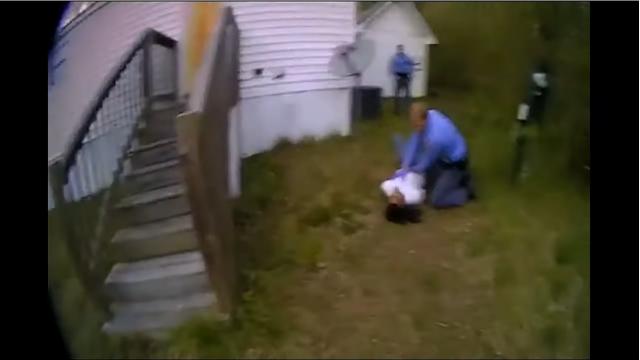 Wake County District Attorney Lorrin Freeman had no objection to the video being released. Shirley asked that one specific angle of the video be withheld. He said that shot was an invasion of the Torres' privacy while he was receiving care.

Deck-Brown said she wanted the public to see what really happened.

She asked for the release of the video to counter what she called misinformation spreading online.

"As a result of the reckless and false information that has been spread on social media, a number of spontaneous protests occurred during the night, which caused minor damage to property in and around downtown Raleigh," Deck-Brown said.

Just before midnight, protesters gathered on Fayetteville Street, chanting "RPD is the KKK" and "Whose streets? Our streets."

They marched to the governor's mansion, took flags off the flag poles and burned them, a Raleigh police officer said around 1 a.m. A smaller group of protesters continued to New Bern Avenue, followed by police vehicles.

As protesters approached the police vehicles, officers activated their lights and sirens around 2 a.m.

As officers moved them onto the sidewalk, the protesters continued to chant, yelling, "No justice, no peace."

A police spokeswoman said one person, Jonathan Taylor Canfield, 23, was charged with simple assault during the protest. ABC 11 said a photographer for that news station was assaulted during the protest but was not seriously injured.

Deck-Brown said that while the Raleigh Police Department upholds the public's right to peaceful protest, she wants to remind the community that damaging another person's property or causing injury to them is unlawful.

Deck-Brown said she understands the public frustration and concern, but said, "There is a method by which they can voice concerns without harming people or damaging property.

Paul Engram, who owns Paul's Barbershop near the shooting scene, said, "We all need to know the truth. Rumors were flying around that it was a child that might have gotten shot."

Engram has hosted open forums that bring police and the community together. He sees one thing that both sides have in common: Fear.

"You've got certain people feeling like they are getting gunned down, and you've got another group that feels like they are trying to do their jobs," he said.

Deck-Brown said there is plenty of opportunity to question the actions of her officers.

"Do it without destroying our city," she said. "What happened last night was wrong on a lot of levels."

Torres was taken to WakeMed where he was reported to be in stable condition. No officers were injured, police said.

Torres will face criminal charges, police said, including going armed to the terror of the public.

The shopping center where Torres was shot was the scene of another officer-involved shooting, in April 2019.

According to his autopsy, Soheil Antonio Mojarrad was shot twice in the chest, his left side, his right hip, his right thigh and his right buttock, and his had graze wounds on his right arm and left buttock.

Police said Senior Officer W.B. Edwards was investigating a report of a cellphone stolen from someone at a Sheetz gas station on New Bern Road when he encountered the 30-year-old Mojarrad outside a nearby shopping center.

Mojarrad began screaming obscenities at Edwards and waving his hands around. He then pulled a folding knife from his pocket, according to the Raleigh Police Department report on the incident.

The officer ordered Mojarrad several times to drop the knife in the encounter, but Mojarrad kept walking toward him. Mojarrad's parents say he suffered from a traumatic brain injury and mental illness, and they have questioned whether the shooting was justified.