Wake Forest, N.C. — With all the rain we had last week--and more rain in the forecast--the lake levels are a concern for some people who live in saturated areas or downstream. Some properties may be at risk for flooding.

People were out enjoying Falls Lake, fishing and boating, on Tuesday--but with extra caution due to the high water levels.

The water was higher than normal, and in some places it was racing and roaring. The flow from the dam was more violent than normal.

However, according to the Army Corps of Engineers, Falls Lake is actually in the best condition right now.

At Jordan Lake the water is so high it covered parking lots and damaged a boat ramp.

At Kerr Lake the water is highest of all – about 12 feet above normal. That has forced all boat ramps on the North Carolina side of the lake to close.

The Army Corps of Engineers is closely watching the levels at all three lakes. They said those who could see the most impact are those downstream from Kerr Lake, as the dams release more water starting later this week when several days in a row of heavy rain are forecast. 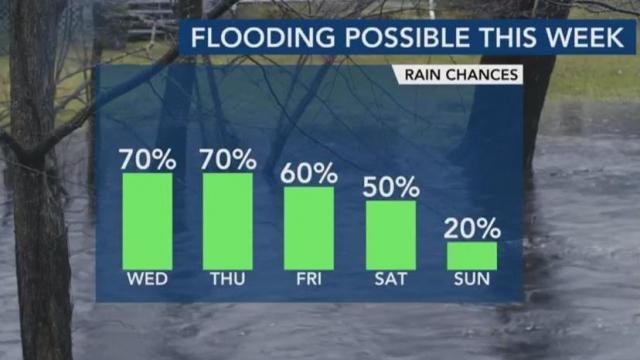 "I think it may primarily be some agricultural impacts. If they have anything planted in their fields closer to the river from Scotland Neck on down through the lower Roanoke," said Tony Young, Water Management Chief for the Army Corps of Engineers.

A return to normal levels could take until the end of next week.

It all depends on how much rain the area gets, starting Wednesday and running through Saturday.