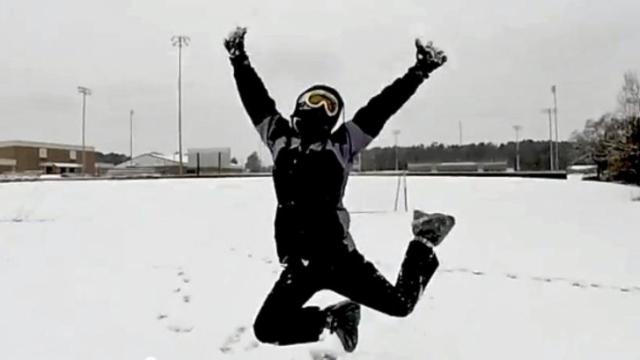 South Johnston High School guidance counselor Tabitha Ward and dean of students Greg Tart came up with the idea to create the video after the county closed schools on Feb. 24.

The video features Tart singing reworded lyrics, Ward dancing and staff and administrators enjoying the snow. It had nearly 45,000 views on YouTube as of Monday afternoon.

"I was thinking maybe a couple thousands (views)," Ward said when interviewed by phone Monday. "If I had known this video would have an audience of 45,000, I would have chosen some different (dance) moves."

"We both come from performing backgrounds," Tart added. "Ms. Ward's a dancer. I lead music at my church."

The duo spent about a day and a half creating the video, including writing new lyrics, shooting snow scenes and editing the final product. The video spread quickly, reaching 30,000 views in 24 hours and 38,000 views in 48 hours.

Ward and Tart say they hope the video shows students that it's OK to have fun and be creative.

"It's that same drive and passion that we used to make the video that we use to serve kids on a daily basis," Ward said. "If frolicking around in the snow is a way to connect with them, then we're willing to do that."

Tart said he hopes it shows students that staff members are human, too, and have interests outside of school.

"We're people, and we had dreams, too, when we were young," he said. "That doesn't mean that we have to put those passions aside."

Those passions could lead to more creative opportunities. Tart says Principal Eddie Price has been very encouraging and even suggested they work on more videos, "maybe something bigger picture to highlight our county school system."

"He's constantly encouraging the whole staff to take chances, try different routes," Tart said. "He's all for it. If it fails, it fails. It's OK. He's game for the next thing."