Dunn, N.C. — The man accused of opening fire inside his Johnston County home last year and killing three people agreed Thursday to a plea deal that will spare his life but require him to spend the rest of it in prison.

Armando Martinez, 40, pleaded guilty to the slayings on Nov. 12. Investigators have said that Martinez opened fire on his family while they were inside their home on Woods Crossroads Road in Dunn about 9 p.m.

The gunfire came from a pistol and a .22 caliber rifle and followed a family argument over wine drinking by Martinez, a prosecutor told the judge during Thursday's sentencing hearing.

During the shooting, two daughters of Martinez's wife and one of the girl's fiance were killed. Prosecutors said 14 bullets were fired during the rampage and the victims were struck by 13 of them.

Four young children, ages 10, 9, 2 and 1, were in the house when the gunfire began, prosecutors said.

Asked if he was guilty, Martinez answered, "Yes."

Prosecutors told the judge that Martinez confessed to police that he committed the murders after he had been taken into custody.

Under the terms of the plea deal, Martinez agreed to serve three consecutive life sentences without the possibility of parole. He also agreed to serve between 125 and 162 months in prison on an attempted first-degree murder charge.

His wife, Tina Martinez, told WRAL News last year that Armando Martinez had argued briefly with her daughter before the gunfire began.

"He just got a wild look in his face," she said at the time. "Something we've never seen."

"He just came out of the room with two guns and started shooting," Tina Martinez said. "I just hollered at him, 'stop honey, stop, stop shooting! Stop honey please!"

'He just came out with two guns and started shooting,' says wife of Johnston man accused of triple murder

Tina Martinez's daughter, Pamela Ramos, 32, and her fiancee, Lynnis Lopez, died on the floor in the den.

Tina Martinez's other daughter, Jessica Aguilar, 26, was shot before she and ran outside, which is where she died with her critically wounded husband, identified as Jose Aguilar, by her side.

The judge agreed to her request to hug her husband before Armando Martinez was escorted out of the prison to begin serving his life sentence. The couple embraced for several minutes before he left the courtroom. 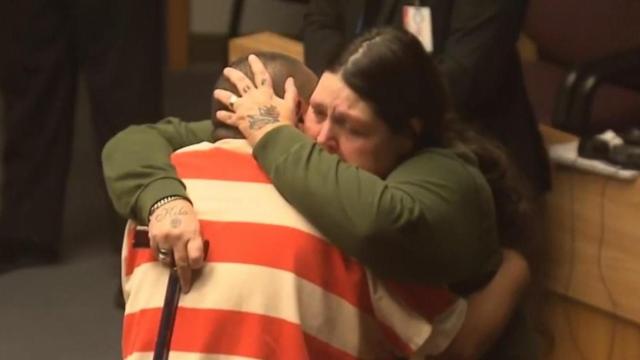 Prosecutors said Thursday that Jose Aguilar was shot in the left shoulder and still suffers from pain connected to the shooting.

After the shootings, deputies said Martinez fled from the scene in a red 1996 Chevrolet S10 pickup, which belonged to one of the victims. He was taken into custody after wrecking the truck in Harnett County.