Johnston County, N.C. — Almost one week after Mother's Day, a grandmother is now without a home after a fire destroyed her house in Johnston County.

Neighbors near Mudham Road in the Corinth Holders community first smelled smoke and could tell something was wrong.

Lonnie Parker was the first to pinpoint the location of the smoke after he drove around on his four-wheeler.

“My neighbor has a fire pit, and she burns stuff, I thought it was a that,” he said. 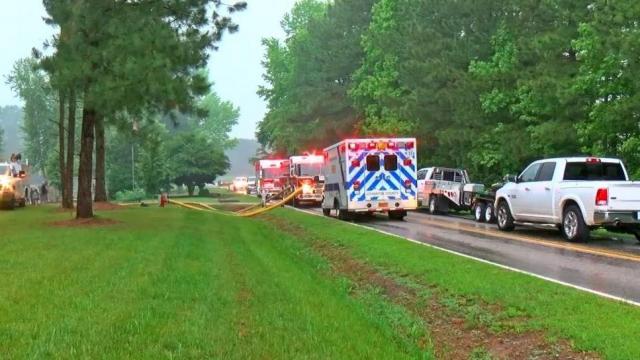 Flames consumed 65-year-old Phyllis Carroll’s home she has lived in for decades.

By the time firefighters arrived, the house was fully engulfed.

Chief Larry Woodard said the house is located half a mile off Mudham road and the rainy, muddy terrain made it difficult for the firefighters to navigate.

“The firefighting part was fine, but getting water to the scene (was difficult),” Woodard said.

Twenty-two years ago, the chimney caught fire, destroying the house. Carroll and her newborn grandchild were home but made it out safely.

More than two decades later, the family is dealing with another devastating fire.

He said fighting this fire hits close to home.

“Matter of fact, I went to school with her son, I knew the lady, it’s bad,” Woodard said.

The cause of the fire has not been determined.

Carroll's family and the Red Cross are helping her. The family said while three generations were raised in the house, it’s unlikely they will rebuild it again.