Four Oaks, N.C. — Johnston County deputies are searching for an arsonist responsible for numerous barn fires in the area.

Sheriff Steve Bizzell said there have been nine fires near the Bentonville and Four Oaks areas since February. So far, all have been storage barns or vacant homes. Investigators said they appear to be related.

“Apparently, we've got a fire bug on the loose burning these old buildings and these old homes,” Bizzell said Wednesday. “It's serious business, and we're taking it very seriously.”

The latest fire occurred at Anthony Westbrook’s family farm on Oak Forest Road in Four Oaks on Sunday. His old storage barn and new $30,000 hay baler were destroyed in an overnight fire.

Wetbrook also lost irreplaceable antique farm equipment, including a tractor that belonged to his late father.

People who live nearby worry the arsonist's next target could be a home with people inside.

Bizzell said deputies are actively chasing leads in the case.

“Just going out in search of a firebug is like finding a needle in a haystack, but I will tell you the needle can be found,” he said. 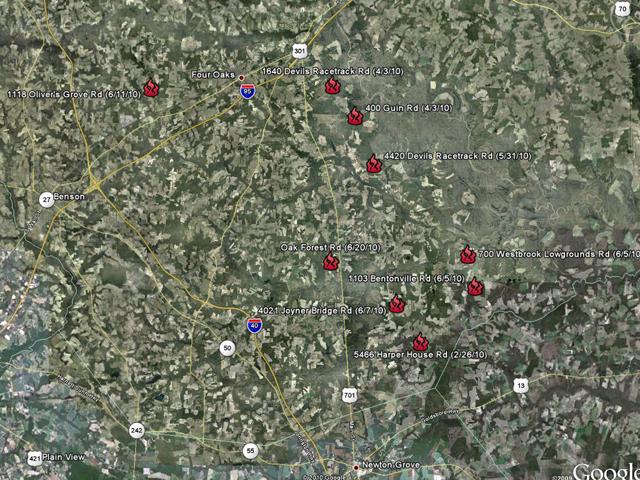