Johnson Pledges to Admit 3 Million From Hong Kong to U.K. 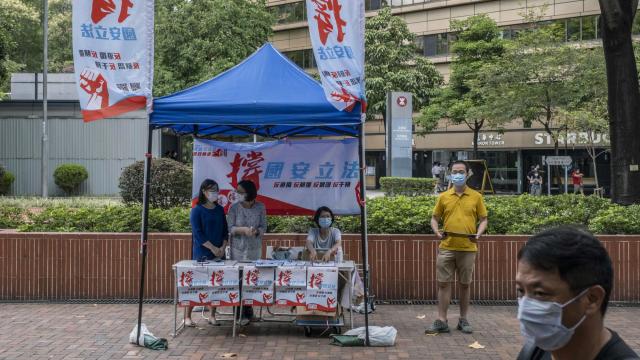 LONDON — Prime Minister Boris Johnson raised the stakes in a brewing confrontation with China on Wednesday, promising to allow nearly 3 million people from Hong Kong to live and work in Britain if Beijing moves forward with a new national security law on the former British colony.

Johnson’s offer, made in a column in The Times of London, opens the door to a significant influx of people fleeing Hong Kong, should the situation in the territory deteriorate further. But it leaves unanswered thorny questions about how difficult it would be for these arrivals to obtain British citizenship.

Describing it as one of the biggest changes in visa regulations in British history, Johnson said the roughly 350,000 Hong Kong residents who hold a British overseas passport, as well as some 2.5 million who are eligible to apply for one, would be granted 12-month renewable visas that would allow them to work in Britain and put them on a path to citizenship.

“Many people in Hong Kong fear that their way of life — which China pledged to uphold — is under threat,” Johnson wrote. “If China proceeds to justify their fears, then Britain could not in good conscience shrug our shoulders and walk away; instead we will honor our obligations and provide an alternative.”

Johnson’s offer applies to Hong Kong residents whose passports bear the insignia of the British government — reflecting their status in the territory before it returned to Chinese sovereignty in 1997 — but do not confer the rights of citizenship that come with an ordinary British passport.

China has angrily rejected the idea, declaring Britain has no right to make such an offer to Hong Kong residents who are Chinese nationals. It is not clear whether Chinese authorities would allow these passport holders to leave and, if they did not, what recourse Britain would have to get them out of Hong Kong.

For Johnson, the crisis illustrates both the pull of Britain’s colonial past and the perils of its post-Brexit future. The new security law in Hong Kong could, for all intents and purposes, eviscerate the Sino-British agreement that returned Hong Kong to Chinese sovereignty.

At the same time, Britain, no longer insulated by its membership in the European Union, is eager to forge new trading relationships with economic powers around the world, and China is high on that list. Johnson’s effort to stand up for people with British overseas passports in Hong Kong could threaten his economic agenda.

“London doesn’t want to have a Hong Kong crisis,” said Steve Tsang, director of the SOAS China Institute in London.

Polls show there is broad popular support for Johnson’s offer of visas to passport holders. But it is not clear how long that support would last if a huge number of immigrants came to Britain at a time when its economy is reeling under the effects of a coronavirus lockdown.

“The last thing London wants is to have 3 million British overseas passport holders coming to the U.K.,” Tsang added.

Britain has barely put to rest its debate over Brexit, which was fueled in large part by fears of untrammeled immigration. Those fears also contributed to Johnson’s landslide election victory last year.

Given all the uncertainty, few analysts expect millions of people from Hong Kong to flood into Britain. In the short run, the policy might be most helpful for students from the city who are studying in Britain on temporary visas. Some of these young people were active in the pro-democracy protests at home and worry about being forced to go back if there is a draconian new security law in place.

After the law was announced, some people in Hong Kong rushed to renew their British passports, while others expressed skepticism that Britain would move forward and grant citizenship.

“I see it as an option to go somewhere else to start over,” said Phoenix Wong, a 33-year-old social worker. “That would give me peace of mind, as I am very worried about Hong Kong’s future.”

But Perrie Tsui, a 25-year-old swim instructor, said: “I don’t think the U.K. government will put politics on a higher agenda than economics.”

Human rights groups applauded Johnson’s immigration pledge, as did lawmakers from his Conservative Party. His fellow Tories have called on him to challenge China’s aggressive moves, whether against protesters in Hong Kong or governments in Africa, where Beijing is accused of predatory lending practices.

“The attacks on the civil rights of Hong Kongers are not just about Hong Kong,” said Tom Tugendhat, a Conservative member of Parliament and chairman of the Foreign Affairs Select Committee. “They are about the undermining of the rule of law around the world and its replacement with the rule of force.”

Tugendhat recently became chairman of the China Research Group, a collection of Conservative lawmakers who aim to scrutinize China’s global ambitions and develop more robust policies for dealing with them. Among its first targets: how China suppressed information about the roots of the coronavirus pandemic.

As in the United States, attitudes in Britain toward China have hardened noticeably in the past few months. In January, Johnson rebuffed an appeal by President Donald Trump to keep Chinese telecommunication firm Huawei out of the country’s advanced digital network. Now, analysts predicted, Johnson is likely to yield to pressure from his own party to tighten restrictions on Huawei’s access. China’s harsh crackdown on Hong Kong has added to those pressures. Johnson, analysts say, cannot stand by as the Chinese undo the Sino-British Joint Declaration, which was signed by Margaret Thatcher and the Chinese premier, Zhao Ziyang, in 1984. The agreement guarantees Hong Kong a high degree of autonomy, under the formula known as “one country, two systems,” until 2049.

But even in those years, Thatcher worried about an influx of Hong Kong residents into Britain before the handover. In 1981, her government reclassified British subjects in the colony as British Dependent Territories Citizens and stipulated that they did not have an automatic right to live and work in Britain.

Since the handover, China has treated all Hong Kong Chinese as Chinese nationals. In a compromise with Britain, those formerly designated as British Dependent Territories Citizens were allowed to continue carrying British national overseas passports, although until now, that did not come with an automatic right of residency.

“It’s a welcome and significant development, particularly given that the current government in the U.K. is generally averse to immigration,” said Sophie Richardson, China director at Human Rights Watch. “The $64,000 question in our mind is, ‘What else will the U.K. do?’ ”

Britain has tried to put together a coalition of countries to pressure Beijing to pull back on the security law.

But at home, critics said, the government could still depress the flow of immigrants by erecting other barriers to citizenship. Others pointed to a discrepancy between Johnson’s offer, which extended to nearly 3 million people, and the proposal made earlier by Britain’s foreign secretary, Dominic Raab, which appeared limited to the 350,000 people who currently hold passports.

Then there is the blunt question of what Britain will do if the Chinese government refuses to let people leave.

“With the Chinese government under Xi Jinping, we cannot rule out the possibility that they won’t be allowed to leave,” said Tsang, referring to China’s leader.

“We don’t have gunboats to send to Hong Kong to get them out of there.”