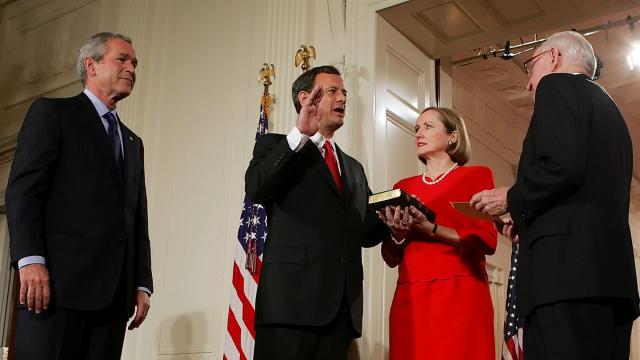 WASHINGTON — In a series of stunning decisions over the past two weeks, Chief Justice John Roberts has voted to expand LGBTQ rights, protect the young immigrants known as “Dreamers” and strike down a Louisiana abortion law. In all three decisions, he voted with the court’s four-member liberal wing.

On Tuesday, he joined his usual conservative allies in a 5-4 ruling that bolstered religious schools.

The decisions may be hard to reconcile as a matter of brute politics. But they underscored the larger truth about Roberts: 15 years into his tenure, he now wields a level of influence that has sent experts hunting for historical comparisons.

“Roberts is not only the most powerful player on the court,” said Lee Epstein, a law professor and political scientist at Washington University in St. Louis. “He’s also the most powerful chief justice since at least 1937.”

An incrementalist and an institutionalist, the chief justice generally nudges the court to the right in small steps, with one eye on its prestige and legitimacy. He is impatient with legal shortcuts and, at only 65, can well afford to play the long game.

Taking the place of Justice Anthony Kennedy, who retired in 2018, at the court’s ideological center, Roberts’ vote is now the crucial one in closely divided cases. To be both the chief justice and the swing vote confers extraordinary power.

His pivotal role on the court could be fleeting. Were President Donald Trump able to appoint a replacement for Justice Ruth Bader Ginsburg, who is 87, or Justice Stephen Breyer, who is 81, the chief justice would almost certainly be outflanked by a conservative majority on his right.

A President Joe Biden, on the other hand, may have fewer opportunities to reshape the court in the short term. Replacing Ginsburg or Breyer with another liberal would not alter the court’s ideological balance or the chief justice’s influence.

And that would mean Roberts would continue to assign the majority opinion when he is in the majority, which these days is almost always. He uses that power strategically, picking colleagues likely to write broadly or narrowly and saving important decisions for himself.

“Even more stunning,” she said, “is that Roberts voted with the majority in 97% of the nonunanimous decisions, compared to his average of 80%. This is the best showing by a chief justice since at least the 1953 term.”

But this may be the most striking statistic: He has been in the majority in every one of the 11 rulings decided by 5-4 or 5-3 votes so far this term. No chief justice has been in the majority in every closely divided case over an entire term since Chief Justice Charles Evans Hughes in the term that ended in 1938 — and that was in only four cases. Roberts has spoken admiringly of Hughes and his deft management of a clash with President Franklin D. Roosevelt. It arose in 1937, when Roosevelt, unhappy with Supreme Court decisions striking down his New Deal programs, announced a plan to add justices to the court.

“One of the greatest crises facing the Supreme Court since Marbury v. Madison was FDR’s court-packing plan,” Roberts said in 2015 at New York University, “and it fell to Hughes to guide a very unpopular Supreme Court through that high-noon showdown against America’s most popular president since George Washington.”

“There are things to learn from it,” Roberts said, and he has seemed to apply those lessons to his relationship with Trump, who has attacked the very idea of judicial independence.

Roberts was appointed by President George W. Bush in 2005, and he was, back then, thought to be a reliable product of the conservative legal movement. Over the years, he occasionally disappointed his supporters and allies, notably in twice voting to sustain the Affordable Care Act and in rejecting the Trump administration’s efforts to add a question on citizenship to the census.

But those disappointments do not compare with the fury that followed the recent decisions. Conservatives said the chief justice has abandoned principle in an effort to protect the court’s reputation — and his own — from accusations that it is a political institution.

“Americans hoping for justice for women and unborn babies were let down again today by John Roberts,” said Sen. Tom Cotton, R-Ark. “The chief justice may believe that he’s protecting the institutional integrity of the court, but in reality, his politicized decision-making only undermines it.”

Conservatives said they suspected the chief justice was acting at least partly based on a distaste for Trump, who has for years lashed out at federal judges who rule against him and his policies. They cited the chief justice’s majority opinions rejecting the administration’s rationales in the cases on the census and the “Dreamers.”

A pair of cases concerning Trump’s efforts to block disclosure of his financial records are among those that remain to be decided by the court this term. They will test Roberts’ leadership, and his votes in them will add important details to the portrait of him that has emerged thus far.

Roberts has tangled with the president before, issuing an extraordinary statement in 2018 after Trump criticized a ruling from an “Obama judge.”

“We do not have Obama judges or Trump judges, Bush judges or Clinton judges,” the chief justice said. “What we have is an extraordinary group of dedicated judges doing their level best to do equal right to those appearing before them. That independent judiciary is something we should all be thankful for.”

In other settings, the chief justice has insisted that the justices do not act as partisans. “We don’t work as Democrats or Republicans,” he said in 2016.

“The chief is sending a broader message to both parties, and this time in this case it is the Republicans who take the hit,” Lazarus said. “But the message would be the same if it were the Democrats and their favored position had lost.”

The message was this, Lazarus said: “You cannot expect us to behave like partisan legislators.”

The abortion case concerned a Louisiana law that was essentially identical to one from Texas that the court had struck down just four years ago, before Trump appointed two new justices. In dissent in 2016, Roberts had voted to uphold the Texas law.

Lazarus said he suspected the chief justice was offended by the idea that a change in the composition of the court should warrant a different outcome in what was, at bottom, the identical case.

This term, Epstein found, Roberts has voted with liberal and conservative justices at roughly equivalent rates.

“In a day and age of ‘fear and loathing’ between opposing partisans,” she said, “this is pretty extraordinary.” Mike Davis, a former Senate Judiciary Committee counsel who is now head of the conservative Article III Project, said he was puzzled by Roberts’ votes.

“The chief rules on these cases in such a way where he believes he is protecting the integrity of the Supreme Court,” Davis said. “And only the chief understands the method to this madness.”

But he added that the rulings would motivate conservative voters in the coming election to back Trump and Republican Senate candidates in hopes of cementing a more reliable conservative majority on the court.

“Over the next four years, the president of the United States could appoint four or more justices to the Supreme Court,” Davis said. “And that is why it is so critically important that conservatives turn out and vote.”

Lazarus said that sort of thinking missed a distinction between politics and law.

“The chief’s clear message is that is not how justices do their work,” he said. “It is a shot across the bow at presidential candidates who campaign with lists of nominees based on the assumption that, if confirmed, they will of course necessarily vote based on the preferences of the majority who supported that candidate.”