JOHN RAILEY: Time's come for Medicaid expansion in this state 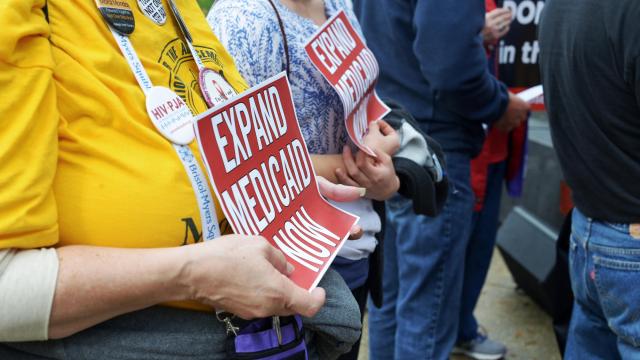 EDITOR'S NOTE John Railey is the executive director of The Partnership for Prosperity, a new initiative fighting poverty in Winston-Salem/Forsyth County.

Carrie McBane of Jackson County made her case for Medicaid expansion at a rally at the state capital last month. “Not being able to afford health care insurance has impacted every aspect of my life,” McBane, who works in a restaurant and has type 2 diabetes, said at a news conference.  “In my worst, most trying moments, it really made me feel that the state I live in doesn’t have my best interest at heart.”

Many North Carolinians might agree with her, including hundreds who came to the Feb. 27 rally, part of more than 500,000 residents who could benefit from expansion. State legislators might finally be hearing them: North Carolina is closer than it’s ever been to expansion.

Republican state Rep. Donny Lambeth of Forsyth County plans to file a bill soon that would expand Medicaid. It’s a reworked version of a bill he filed in 2017, "Carolina Cares."  One big difference is that this time, with changes in the political climate and most other states having gone for expansion under the 2011 Affordable Care Act, the bill has a fighting chance.  Expansion is the practical and right thing to do.  The federal government would pay 90 percent of the costs.  The hurting people that expansion would help range from farmers to some veterans.  Many of them work.  Many of them end up in emergency rooms, driving up health-care and insurance costs in general.

Expansion would benefit state residents from 19- to 64-years-old who earn too much money to qualify for Medicaid now, but don’t make enough money to buy private health insurance.

Expansion is supported by a wide range of organizations, including the N.C. Association of Free and Charitable Clinics, which has its headquarters in Winston-Salem.

“North Carolina’s free and charitable clinics exist in Forsyth county and communities across the state for the charitable purpose of providing healthcare to residents who are without any form of health insurance,” Randy Jordan, the group’s executive director, told me, “The expansion of Medicaid and other ways of closing the health insurance coverage gap will benefit many of our patients who live at 200 percent or less of the federal poverty level.  Securing coverage for an estimated 600,000 of these residents will open up appointment slots and related resources in our busy clinics for the remaining 500,000 uninsured who are living in North Carolina without a medical home.”

Lambeth’s bill, in addition to encouraging preventative care, would also include a requirement that those receiving Medicaid pay modest premiums and be working, be in a job-training program or actively seeking employment. Democrats have filed bills devoid of such requirements.  The important thing is that those bills and Lambeth’s planned one have sparked serious dialogue about expansion.  Whether expansion comes through compromise over one of those bills or through deal-making in the budget process, expansion must happen in a bipartisan manner.  Our many neighbors who lack health care must be helped.

Carrie McBane, who spoke at the February press conference, underscored what the lack of health care has meant to her: “It’s demeaning, and it puts a price tag on my life when there shouldn’t be a price on a human life.”

Our legislators are hearing her and others. Now they must take action.