John Portman, Architect Who Made Skylines Soar, Dies at 93 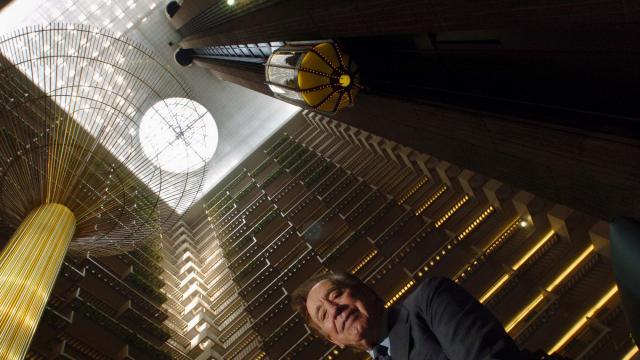 John Portman, the architect and developer who revolutionized hotel designs with soaring futuristic atriums, built commercial towers that revitalized the downtowns of decaying postwar U.S. cities and transformed Asian skylines from Shanghai to Mumbai, died Friday in Atlanta. He was 93.

Portman’s family announced his death. No cause was given.

One of the world’s best-known and most influential architects, Portman, over a half-century, redefined urban landscapes in the United States. He built the Peachtree Center in Atlanta, the Embarcadero Center in San Francisco, the Renaissance Center in Detroit and scores of hotel, office and retail complexes in New York, Los Angeles, Chicago, Houston, Fort Worth, San Diego and other cities.

His buildings often evoked oohs and aahs from the public, but were not always a hit with critics, who called them concrete islands, self-contained cities within cities — serving their patrons yet insular, even forbidding to outsiders. But by combining architectural talents with the savvy of a real estate entrepreneur, Portman was hugely successful and a rarity among contemporaries: both an artist and a tough businessman.

An Atlanta maverick who defied architects’ ethics codes by plunging into real estate development, Portman, who had no money to start with, made and lost millions of dollars cofinancing many of his own projects. From the 1980s on he designed and built hotels, retail marts and office towers in China, South Korea, Singapore, Malaysia and India — and more complexes in Europe, the Middle East and the United States.

As they proliferated in the United States, Portman’s atrium hotels, many built for the Hyatt Corp., were widely imitated by other architects who sought to capitalize on the dizzying exhilaration (some called it terror) of patrons soaring 50 stories in a Buck Rogers glass capsule, or dining under the stars as the city moved in a circle with the galactic night. You did not even have to rent a room.

There were setbacks for the atrium concept. The 40-story Hyatt Regency Kansas City, designed by three local architects with an atrium imitating Portman’s, was the scene of a collapse of two aerial walkways in 1981 during a dance competition in the lobby. The collapse killed 114 people and injured 216 others in one of the nation’s deadliest structural failures.

By the late 1980s, with atriums in the Westin Bonaventure in Los Angeles, the Hyatt Regency in San Francisco, the Marriott Marquis in New York and dozens of others, the design was so common that some motels had what passed for atriums. Travelers were no longer impressed, and critics said Portman had repeated himself too often.

But his atriums were laced into popular culture. In the 1977 film “High Anxiety,” Mel Brooks, as an acrophobic psychiatrist facing a sheer drop at the San Francisco Hyatt, inches to his room clinging to the walls. And in a 1993 film, “In the Line of Fire,” Clint Eastwood’s Secret Service agent outlasts a would-be presidential assassin in a glass elevator at the Los Angeles Bonaventure.

As federal support for urban renewal faded in the 1970s, Portman’s commercial towers were hailed as downtown saviors, bringing back tourists and suburban shoppers, renewing economies and crumbling landscapes. But some failed, and a rising chorus of critics derided his structures as islands of exclusion, paradoxically cut off from the downtowns they were intended to rescue.

His Renaissance Center in Detroit was a glaring example. A cluster of four 39-story office buildings and a 73-story hotel with shops, restaurants and theaters was built in the 1970s to save a depressed city. But its gleaming towers on the Detroit River were as remote as a cloud-ringed Disneyland castle. Office workers, visitors and suburban shoppers could drive in and out without ever setting foot downtown.

Portman’s Marriott Marquis Hotel, which opened in a still-seedy Times Square in New York in 1985 with a 45-story atrium and an eighth-floor lobby, was “a cold, grim place,” wrote Paul Goldberger, then The New York Times’ architecture critic. “Like so much of Mr. Portman’s architecture, the hotel is turned almost completely inward; the architect seems interested in urban activity only insofar as it can be canned and packaged within its walls. To the rest of New York, this building turns a harsh concrete wall.”

Portman scoffed, arguing that open spaces in congested cities relieved anxieties. Influenced by Frank Lloyd Wright, who harmonized structures with people and surroundings, Portman said his own buildings, especially hotels, were oases within cities, designed to enhance the experiences of the people who used them.

“Anyone can build a building and put rooms in it,” he told The Times in 2011. “But we should put human beings at the head of our thought processes. You want to hopefully spark their enthusiasm. Like riding in a glass elevator: Everyone talks on a glass elevator. You get on a closed-in elevator, everyone looks down at their shoes. A glass elevator lets people’s spirits expand. Architecture should be a symphony.”

Colleagues said Portman, like his buildings, was proudly self-contained. Tall, soft-spoken, with a gentle smile and wavy hair, he worked incessantly, was not given to small talk and never shed his slight air of Old South formality. In a profession that regarded architecture and real estate development as a conflict of interest, he aggressively pursued both, designing buildings while his firm bought property and arranged financing and construction for projects that required partners and millions of dollars from lenders. At first, no hotel chain would touch his ideas. Even in Atlanta, few accepted his vision of a redeemable downtown.

But the Peachtree Center in Atlanta was a spectacular success: 14 blocks of office towers, hotels and shopping arcades opened in 1961 with the Merchandise Mart, a wholesale complex that lured hordes of buyers. The Hyatt Regency was built in 1967 to accommodate them. It made Portman famous, revolutionized hotel construction and spurred Peachtree to completion. It was a key to the downtown renaissance and changed Atlanta’s view of itself.

“Portman saw his mission as making the city safe for the middle class,” Goldberger wrote in 1996, “and he did so almost too well, for he filled Atlanta with buildings that brought a kind of suburban mall mentality to the center of downtown.”

John Calvin Portman Jr. was born in Walhalla, South Carolina, on Dec. 4, 1924, to John Calvin and Edna Rochester Portman. His father was a government worker, his mother a beautician. He grew up in Atlanta, where he played football and graduated in 1943 from Tech High School.

In 1944, John Portman married Joan Newton. They had six children. Besides his wife, he is survived by four sons, Michael, John C. III, Jeffrey and Jarel; a daughter, Jana Simmons; three sisters, Glenda Dodrill, Anne Davis and Joy Roberts; 19 grandchildren; and five great-grandchildren. He was preceded in death by a son, Jae, and two sisters, Mabel Creel and Phyllis Tippet.

John Portman attended the U.S. Naval Academy in 1944 and 1945, then transferred to the Georgia Institute of Technology, where he earned a degree in architecture in 1950. After an apprenticeship with an Atlanta architect, he opened his own practice in 1953. He struggled at first, designing drugstores and YMCAs.

A growing respect for the hard economic realities of architecture prompted Portman’s first venture into real estate, financing a small medical building he designed. The deal fell through, but Portman was convinced that development was the key to success in architecture.

In 1956, he and H. Griffith Edwards, a former Georgia Tech professor, became partners. Portman designed buildings and Edwards, 20 years older, managed construction until he retired in 1968. They took joint credit for many projects, including the Hyatt Regency Atlanta, Portman’s creative genesis. In the 1980s, Portman developed properties in Shanghai, Singapore and South Korea. By the end of the decade, with capital drying up and regulators tightening lending requirements, his empire was $2 billion in debt. He surrendered a controlling interest in the Peachtree Center, the keystone of his holdings.

But in 1991, the lenders let him retain most of his properties and provided millions of dollars in new capital in exchange for 8 percent of Portman’s assets. He was soon on his feet again, completing the huge, multiuse Shanghai Centre and properties in Beijing; Kuala Lumpur, Malaysia; and Mumbai, India.

Portman rarely attended public events, though he accepted many awards in person and gave parties for hundreds. He painted abstracts, created sculptures and designed furniture at a beach house he built on Sea Island, Georgia. He co-wrote several books, including “The Architect as Developer” (1976, with Jonathan Barnett), and was the focus of a 2011 documentary by Ben Loeterman, “John Portman: A Life of Building.”

At 86, he was still running John Portman & Associates. “A fish got to swim and a bird got to fly,” he told The Times in his Southern Comfort drawl. “I’m here six days a week, and it’d be seven if I didn’t make a commitment to my wife to take a day off.” He never retired.