John Lithgow, on Barnstorming His Way to Broadway 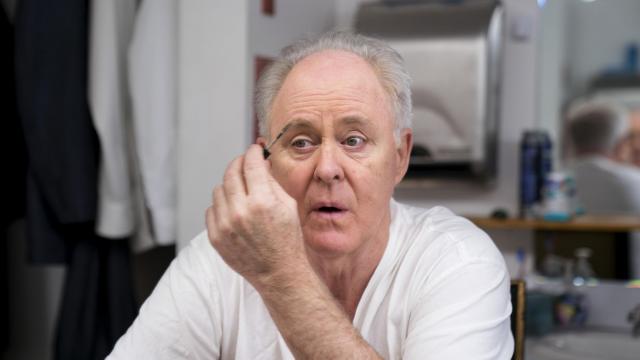 In the spring of 2008, I cooked up a one-man show for myself. In shaping it, I mixed the riotous writing of Ring Lardner and P.G. Wodehouse with stories about my family, my father’s life in the theater and my beginnings as an actor. I performed it for seven consecutive Monday nights at Lincoln Center’s Mitzi Newhouse Theater on the set of somebody else’s play. I called it “Stories by Heart.” It was a pretty slapdash affair, a kind of workshop performance that allowed me to try on a solo show for size.

Last week, I opened that same show on Broadway at Roundabout’s American Airlines Theater. It has come a long way from those first few Monday nights 10 years ago. The journey from the little Mitzi Newhouse to a big Broadway stage is a story in itself.

After the show’s maiden Lincoln Center run, a tour booker sent me off to perform it as a one-night stand whenever my schedule allowed. Over the years, I played in concert halls, arts centers and college auditoriums. I hit about 35 cities, most of which I’d never visited before: Indianapolis, St. Louis, Austin, Boulder, on and on and on.

On those outings, I felt like I was leading the life of a time-warp vaudevillian. The stagehands of old opera houses in towns like Galveston and Lexington would boast that Harry Houdini had performed there. Posters for Hal Holbrook’s “Mark Twain Tonight!” were proudly displayed at every single whistle-stop along the way.

Unwittingly, I had provided myself with a unique scheme for getting to know my own country. I managed to give myself a free day in each town. How else would I have ever gotten to see Graceland in Memphis? The Murrah Building memorial in Oklahoma City? The Arabia Steamboat Museum in Kansas City? And a dozen magnificent American art galleries?

Sometimes my gigs were intensely nostalgic. I appeared on stages where I had first performed in my teens and early 20s, like Harvard’s Loeb Drama Center, Cleveland’s Great Lakes Theater Festival, New Haven’s Long Wharf and Princeton’s McCarter Theaters. On those nights, I sensed the presence of ghosts watching me from the wings. I grew up in a peripatetic family, following the unpredictable fortunes of my regional-theater-producer father. I went to eight different public schools. As a result, at several of my tour stops, long-lost childhood friends would send word backstage that they were in the house.

On one such occasion, I arrived in Pittsfield, Massachusetts, near the town of Stockbridge, where I had lived for a year when I was 12. At the theater box office, there was a message waiting for me from someone named Vincent Flynn.

I immediately recognized the name as an old friend from my year in Stockbridge. I called up Vincent and heard his high, piping voice, unchanged after all these years. I arranged tickets for him and when I made my entrance that evening, I introduced him from the stage.

My intro was met with silence. I searched the crowd for Vincent. After a long pause, an elderly man shyly got to his feet out there in the half-darkness. I cried out, “Ladies and gentlemen, meet Vincent Flynn! My very best friend from eighth grade! This is the first time I’ve laid eyes on him in 52 years!”

Greeting Vincent backstage, I was thrilled to learn that he’d made a career of recording sacred songs in that beautiful tenor voice of his.

In London I was invited to do two successive Monday night performances of my show on the Lyttelton stage of the National Theater. The first fell on Oct. 19, 2009. As I walked onstage, I made an impulsive decision. When the entrance applause died down, I greeted the audience:

“Ladies and gentlemen, this is a big night for me. It’s my first appearance at the National Theater. In fact, it’s my first professional performance on any London stage. Best of all, tonight just happens to be … my 64th birthday!”

They applauded that as well. Then I lifted my hands, belted out one of the most recognizable lead-ins in the history of popular song, and led the whole crowd in the first verse of the Beatles’ “When I’m Sixty-Four.” An audience of 900 Brits sang along, full throated and word perfect.

When we finished the verse, I spoke again:

“Now if you’ll excuse me, I’m going to walk back into the wings and die of happiness.”

Such moments made my days on the road fun and memorable. But in the meantime, something far more important was happening. “Stories by Heart” was getting better.

My essential collaborators were the people out front. Audiences teach you a lot, and the toughest audiences arguably teach you the most. Just think what you can learn by performing a one-man show at a casino in Reno, Nevada, in a cavernous space which, for many years, was advertised as “the largest stage in the world.”

Every time I presented the show, I found ways to refine it. I would cut, reorder, rewrite and discover new physical business and tricks of comic timing.

Take “Haircut,” for example. Ring Lardner’s short story is told by a barber to his customer in a small town in Michigan, circa 1925. Having performed the story for 10 years, I’ve perfected every tiny gesture of an old-time shave-and-a-haircut, from start to finish. All the props in the barber shop are invisible, but by now the audience sees them anyway.

Beyond all those incremental improvements, I have gradually developed a deeper understanding of what my own show is really about. I’ve come to see that, beyond purely entertaining, I am in the business of consciousness raising.

I am helping people discover or rediscover the dazzling work of Lardner and Wodehouse. I am offering ruminations on why actors perform and why people watch. I am reminding people of the simple power of great writing spoken out loud and of the indispensable role that storytelling plays in our lives. And on a personal level, I am informing people of the remarkable career of a quixotic pioneer of the American regional theater movement, my father, Arthur Lithgow, who died in 2004. Nothing is more fleeting than a career in show business. How many actors are lucky enough to bring a father back to life in front of an audience?

Finally, I am celebrating our collective imagination. I perform “Stories by Heart” on an empty stage with a few sticks of furniture and a dusty old book. But if all the real and imagined people, places and things that inhabit my show were concrete and tangible, I would need a Reno-size stage to contain them.