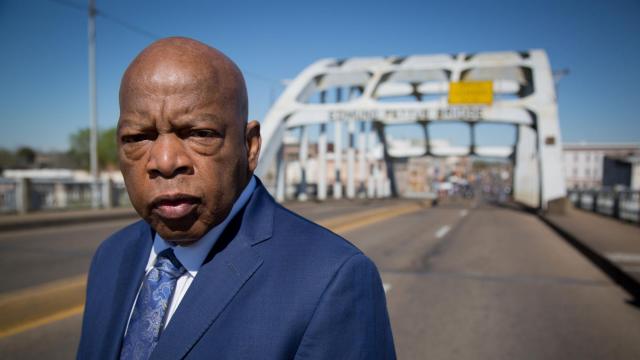 CNN — Civil rights icon and US Democratic Rep. John Lewis of Georgia made a surprise appearance at this year's "Bloody Sunday" commemorative march in Selma, Alabama, where he delivered an impassioned plea to voters to use the ballot box as "a nonviolent instrument or tool to redeem the soul of America."

Lewis, who had his skull broken by white police officers during the 1965 march across the Edmund Pettus Bridge in Selma, was diagnosed with stage 4 pancreatic cancer in December. At the time, Lewis said he would undergo treatment for the cancer, and speculation swirled about whether the longtime congressman would be able to participate in the 55th anniversary march.

"Fifty-five years ago, a few of our children attempted to march ... across this bridge. We were beaten, we were tear-gassed. I thought I was going to die on this bridge. But somehow and some way, God almighty helped me here," Lewis said in an emotional speech on Sunday at the apex of the bridge. "We must go out and vote like we never, ever voted before."

The commemorative march pays tribute to the key civil rights protest pushing for voting rights in which participants attempted to walk from Selma to Alabama's capital, Montgomery. One of the pivotal days was March 7, 1965, when 17 people, including Lewis, were injured by police.

The march has been reenacted many times on its anniversary. In 2015, President Barack Obama marked the 50th anniversary of the march by delivering a speech at the foot of the Edmund Pettus Bridge, and the following year, the marchers received a Congressional Gold Medal, Congress' highest civilian honor.

A spokeswoman for the commemoration march organizers told CNN that Lewis would be at the front of the march participants -- the same position he has been at previous anniversary marches. The spokeswoman did not know how long he would be marching across the bridge.

Another spokesperson for the congressman said his visit to the bridge will be brief.

"He is going to meet the crowd on the apex of the bridge and will leave shortly thereafter," they said, adding that Lewis doesn't plan to do any interviews during the event.

First elected to represent Georgia's 5th Congressional District, which includes much of Atlanta, in 1986, Lewis is sometimes referred to as "the conscience of the US Congress." He is known for getting into "good trouble," and by his own count, the congressman was arrested more than 40 times during his days of civil rights activism.

On Sunday, Lewis urged attendees of the march to get into some "good trouble" themselves.

"To each and every one of you, especially you young people ... Go out there, speak up, speak out. Get in the way. Get in good trouble. Necessary trouble, and help redeem the soul of America," he said, as marchers echoed his words and cheered him on.