John Lewis, a Man of ‘Unbreakable Perseverance,’ Laid to Rest 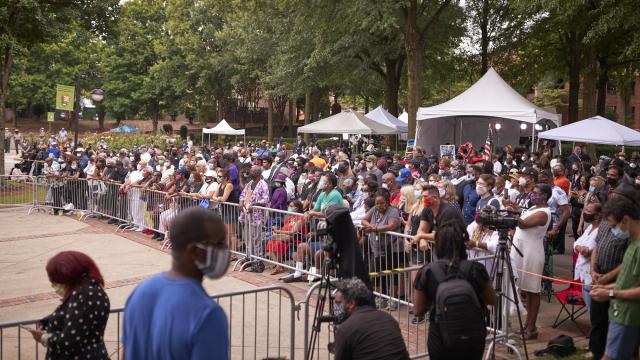 ATLANTA — Three former presidents and dozens of other dignitaries were drawn to Ebenezer Baptist Church on Thursday to bid farewell to John Lewis, a giant of Congress and the civil rights era whose courageous protests guaranteed him a place in American history. But even as the funeral looked back over Lewis’ long life, it also focused very much on the tumultuous state of affairs in the country today.

The most pointed eulogy came from former President Barack Obama, who issued a blistering critique of the Trump administration, the brutality of police officers toward Black people and efforts to limit the right to vote that Lewis had shed his blood to secure.

The political tone of the ceremony came as little surprise. Lewis, who died July 17 at age 80 after a battle with pancreatic cancer, had spent more than three decades in Congress as a thorn in the side of Republican administrations. And he and President Donald Trump had traded public slights since before Trump took office.

Obama compared Lewis to an Old Testament prophet and credited him with directly paving the way for the nation’s first Black president. He also took aim at the forces that he said were working against the equality for Black Americans and other oppressed people that Lewis had spent a lifetime championing.

“Bull Connor may be gone,” Obama said, referring to the 1960s-era public safety commissioner of Birmingham, Alabama, who turned fire hoses and dogs on civil rights protesters. “But today, we witness, with our own eyes, police officers kneeling on the necks of Black Americans.”

George Wallace, the Alabama governor who endorsed segregation and used racist language, may also be gone, Obama continued. “But we can witness our federal government sending agents to use tear gas and batons against peaceful demonstrators.”

And while insuperable poll tests for Black people may be a thing of the past, Obama said, “Even as we sit here, there are those in power who are doing their darnedest to discourage people from voting by closing polling locations, and targeting minorities and students with restrictive ID laws, and attacking our voting rights with surgical precision.”

The critique elicited a torrent of applause from the invitation-only audience at Ebenezer Baptist Church, the famed institution that Lewis attended and where Martin Luther King Jr., Lewis’ mentor and ally, once preached.

The mourners, masked to prevent the spread of the coronavirus, were strategically limited in number to ensure social distancing. Some took their seats as an organist played “We Shall Overcome,” a protest anthem sung by Lewis countless times during his nonviolent confrontations with segregationist forces in the South who beat and injured him on several occasions.

Obama praised Lewis in his eulogy as an “American whose faith was tested again and again to produce a man of pure joy and unbreakable perseverance.”

In death, Lewis drew a bipartisan crowd, including former Presidents George W. Bush and Bill Clinton, although Trump did not attend. House Speaker Nancy Pelosi and dozens of members of Congress were also at the three-hour service, presided over by Ebenezer’s pastor, the Rev. Raphael G. Warnock, who is running as a Democrat for a Senate seat.

Bush gave a short, warm speech in which he praised Lewis’ Christian faith and recalled working with him to establish the National Museum of African American History and Culture in Washington.

“Listen, John and I had our disagreements, of course,” said Bush, a Republican. “But in the America John Lewis fought for, and the America I believe in, differences of opinion are inevitable elements and evidence of democracy in action.”

The line was as well-received as Bush himself: Warnock noted that Bush was president “the last time we reauthorized the Voting Rights Act.” It was a markedly different tone from the 2006 funeral of Coretta Scott King, King’s widow, in which numerous speakers criticized the Bush administration while Bush, then in his second term, looked on.

Clinton called Lewis “a man I loved for a long time” and someone who was “on a mission that was bigger than personal ambition.”

He also said that Lewis had learned a lesson after he was asked by other civil rights leaders to tone down a fiery speech that he had written for the March on Washington in August 1963. “He listened to people that he knew had the same goals say, ‘Well, we have to be careful how we say this because we’re trying to get converts, not more adversaries.’ ”

It came as little surprise that Lewis’ funeral would dwell as much on the present as on his younger days, including his beating in 1965 by Alabama state troopers at the Edmund Pettus Bridge in Selma, Alabama, an atrocity that helped spur Congress to pass the Voting Rights Act. On Thursday, The New York Times, at Lewis’ request, published an essay he wrote that praised the Black Lives Matter movement and urged continued participation in the democratic process. Lewis’ funeral also came amid a fraught season in Atlanta, which he represented as part of his 5th Congressional District. In recent weeks, the city has been rocked by protests, both peaceful and violent, over systemic racism and police brutality.

His coffin was carried into the sanctuary not long after Trump made unsubstantiated assertions of potential vote-by-mail fraud and floated the idea of postponing the election this November — a suggestion that shocked both critics and allies and heightened concerns that he might not accept the results if he were to lose.

The funeral underscored how Lewis believed that his decadeslong civil rights fight could be waged in a spirit of comity — and with a belief that the American project was not fatally flawed but perfectible in the hands of a citizenry willing to go to the polls and engage in nonviolent protest.

The need to form coalitions with converts to the civil rights cause, including white people, was a cornerstone of Lewis’ belief system, and it clashed in the mid-1960s with a more radical branch of the movement that was skeptical of nonviolence as an effective strategy and prioritized Black political and economic power over integration. Stokely Carmichael, a proponent of this worldview who would later change his name to Kwame Ture, was chosen to replace Lewis in 1966 as chairman of the Student Nonviolent Coordinating Committee.

“There were two or three years there where the movement went a little bit too far toward Stokely,” Clinton said. “But in the end John Lewis prevailed.”

That philosophical tension, however, continues to play out among African Americans and the activists powering the current Black Lives Matter movement.

In his many years in public life, Lewis played crucial roles as a critic who stood — often literally — against government power, but also as one who worked within the system as a 33-year member of Congress.

The encomiums were not all of a political nature. The ceremony, which began with a tolling of a bell for each of his 80 years, also featured warm remembrances from family and staff members. A number of speakers revived the story of how a young Lewis, who grew up on an impoverished farm near Troy, Alabama, used to preach to his family’s chickens.

Called to something bigger, he eventually met King, who famously nicknamed him “the boy from Troy.”

Xernona Clayton, a longtime civil rights advocate, humorously recalled her strong-armed and ultimately successful efforts to effect a love match between a young Lewis and his future wife, Lillian Miles Lewis, who died in 2013. Lewis, she said, seemed like a man who was going places, unlike “the bums” who had approached Lillian in the past.

In his eulogy, Obama, among other things, called on Congress to pass a new Voting Rights Act named for Lewis, for the end of gerrymandering and for the establishment of a national holiday on Election Day to make it easier for working people to get to the polls.

Echoing a favored theme, Obama also praised Lewis for understanding that it takes not only faith but hard work to improve the country and keep a healthy democracy on course.

Lewis exhibited, he said, “that most American of ideas — the idea that any of us ordinary people, without rank or wealth or title or fame, can somehow point out the imperfections of this nation and come together and challenge the status quo and decide that it is in our power to remake this country that we love until it more closely aligns with our highest ideals.”

For that, he said, Lewis would come to be viewed as “a founding father of that fuller, fairer, better America.” The sentiment resonated with the crowd that had gathered outside the church. Many dashed over to get a look as Lewis’ coffin was carried out.

But Latasha Cosby-Woods stood off to the side with her hand raised in prayer. She prayed, she said, for unity and justice, and for a new younger generation of activists: “the John Lewises of the world,” she said, who might “go forth and make a difference.”