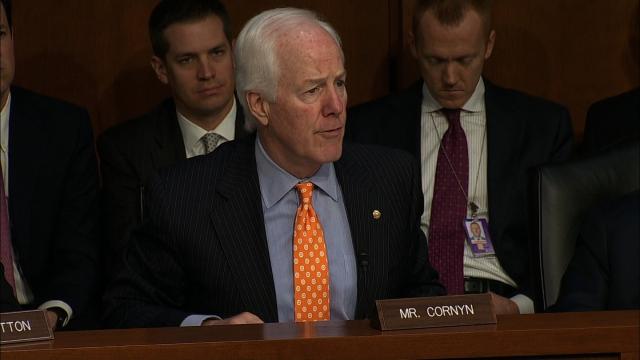 Republicans and Democrats are at an impasse over which documents are relevant to Judge Brett Kavanaugh's nomination to the Supreme Court, threatening Republican hopes the nomination can move quickly through the Senate.

Weeks after he was nominated, Kavanaugh's extensive paper trail both as a judge on the DC Circuit and as a staff secretary in the Bush-era White House remains a flash point between the two parties with Republicans accusing Democrats of leading a fishing expedition for irrelevant information and Democrats accusing Republicans of obscuring Kavanaugh's past record.

"I agreed to meet with Sen. Feinstein, Sen. Grassley and the White House counsel to talk more about that, but I know there are a lot of conversations occurring, and I think the intention is to produce relevant documents as soon as possible on a rolling basis." Cornyn said.

The disagreement over documents boiled over Tuesday on the Senate floor with Grassley going to the floor to blast Democrats and Feinstein releasing a statement calling for Republicans to have more transparency in the nomination.

"For years, Republicans argued the Senate should see all the documents for a Supreme Court nominee, but now they're trying to change that standard. All we're asking for is the same documents from his tenure in the White House that Republicans asked for in the past. No more, no less," Feinstein said in a statement.

Behind closed doors Tuesday, White House Counsel Donald McGahn met with top Republican senators where the issue of document production was one of the issues discussed, per a source.