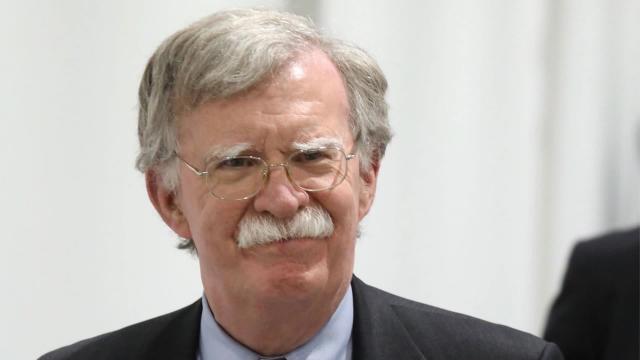 CNN — Lawyers for former national security adviser John Bolton have had talks with the three House committees leading the impeachment inquiry about a possible deposition, according to a source familiar.

If he does give a deposition, Bolton would join a handful of current and former Trump administration members who have been interviewed this month as part of the Democratic-led inquiry into President Donald Trump's dealings with Ukraine.

As House members who serve on the Intelligence, Oversight and Foreign Affairs committees have been interviewing witnesses in private, some of the committees' Democrats have said they believe there's a need for Bolton to testify.

Fiona Hill, Trump's former top Russia adviser, told lawmakers last week that she saw "wrongdoing" in American foreign policy and that Bolton had encouraged her to report her concerns to the National Security Council's attorney, sources had told CNN.

A source told CNN that Hill testified that Bolton referred to Trump's personal attorney Rudy Giuliani, who was working to dig up dirt on the Bidens, as a "hand grenade," who was "going to blow everybody up."

Hill also spoke about what she described as a rogue operation carried out by US Ambassador to the European Union, Gordon Sondland, and White House acting chief of staff Mick Mulvaney, which Bolton characterized as being like a "drug deal," that source said.

The top US diplomat to Ukraine, Bill Taylor, told Congress this week that Bolton had expressed concern about the July call between Trump and Zelensky, according to Taylor's opening statement.

Taylor's opening statement also alleged that Trump was pressing for Ukraine to publicly announce investigations into the Bidens before he would greenlight US security assistance and a White House meeting with Zelensky.

Tim Morrison, a top Russia and Europe adviser on the National Security Council, had listened to the Trump-Zelensky call and informed Taylor about the conversation. Morrison is expected to testify before House impeachment investigators next week, making his testimony one of the first from someone who directly heard the call.

Trump fired Bolton as his national security adviser last month, after Trump made clear he "strongly disagreed" with many of Bolton's suggestions. Bolton, however, insisted that he had resigned.

Trump had grown increasingly irritated with Bolton for his statements on Iran, Venezuela and Afghanistan, and felt that Bolton could no longer advocate for the President's agenda, a senior administration official told CNN at the time.

Trump and Bolton had gotten into a heated argument over the President's decision, which he later reversed, to host leaders of the Taliban at Camp David.

After his departure from the administration, Bolton spoke out against Trump's policies and secured a book deal, Axios reported.

The New York Times first reported that Bolton's lawyers were talking to the House committees.