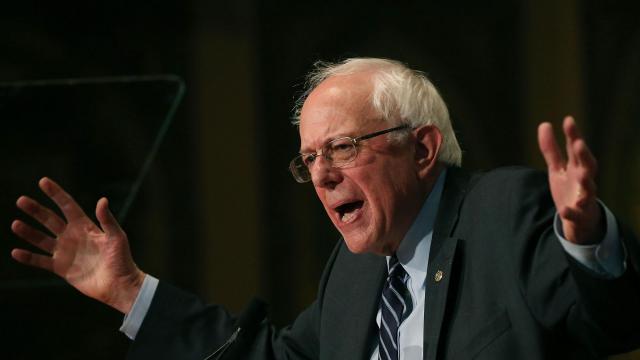 CNN — With the Iowa caucuses just days away, Joe Biden has turned to the simplest of arguments against the ascendant Bernie Sanders: He's not really a Democrat.

In the Hawkeye State on Thursday, Biden responded "I'm a Democrat" when asked the difference between himself and the Vermont senator. "Well, he says he's not," Biden added of Sanders. "He's not registered as a Democrat."

On Friday morning, in an interview on ABC's "Good Morning America," Biden kind of, sort of clarified those comments. "Bernie is a Democrat," Biden told George Stephanopoulos. "Bernie calls himself a Democratic Socialist. We have different views on a whole lot of things."

Biden's last-minute attack on Sanders' Democratic bona fides echoes a line of argument that Hillary Clinton used to bash the Vermont senator during the 2016 primary fight -- and in her after-action report (in the form of memoir "What Happened?") of the race.

"He isn't a Democrat -- that's not a smear, that's what he says," Clinton wrote. "He didn't get into the race to make sure a Democrat won the White House, he got in to disrupt the Democratic Party." And, of course, in the forthcoming Hulu documentary of her 2016 campaign, Clinton said of Sanders: "He was in Congress for years. He had one senator support him. Nobody likes him, nobody wants to work with him, he got nothing done."

Sanders himself seemed to acknowledge that his party affiliation was an issue for some voters when he delivered a major speech last summer aimed at explaining Democratic Socialism.

"It is my very strong belief that the United States must reject that path of hatred and divisiveness -- and instead find the moral conviction to choose a different path, a higher path, a path of compassion, justice and love," Sanders said. "It is the path that I call democratic socialism." He went on in that speech to quote Harry Truman: "Socialism is the epithet they have hurled at every advance the people have made in the last 20 years. Socialism is their name for almost anything that helps all the people."

There's no debate about this fact: With the exception of his 2016 and 2020 presidential bid, Sanders has run and won as a Democratic Socialist. Following his 2016 defeat at Clinton's hands, Sanders un-enrolled as a Democrat and ran for reelection in 2018 as a Democratic Socialist. (He is technically labeled as an independent in the Senate -- one of two -- and caucuses with Democrats.) As PolitFact noted in a detailed fact-check of Sanders' party affiliation in 2016: "One thing is clear: Sanders isn't enthusiastic about being part of the Democratic club, or any club for that matter."

What's far less clear is how much voters care -- if at all. Sanders has never made any secret of his distrust of the political establishment (of both parties) and, as Donald Trump's election proved, voters are drawn these days to candidates they view as not beholden to the status quo. But, while independents can vote in some of the primary contest over the coming months, this is a nomination that will be decided overwhelmingly by Democrats. Will they vote for someone who isn't, well, fully one of them?