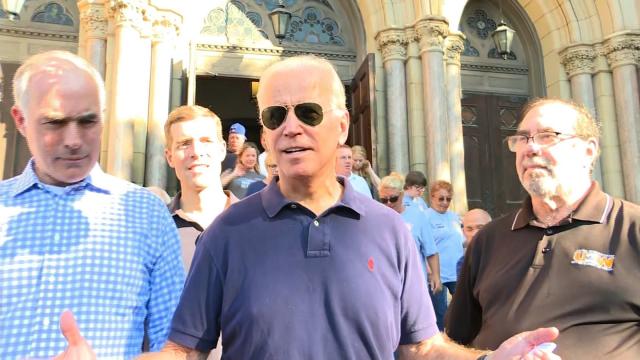 (CNN) — Officially, Joe Biden remains undecided about whether he will run for president for a third time in 2020.

But unofficially, the former vice president sounds like he is running -- no, sprinting -- toward the presidential starting line.

"I'll be as straight with you as I can. I think I'm the most qualified person in the country to be president," Biden said at an appearance Monday at the University of Montana. "The issues that we face as a country today are the issues that have been in my wheelhouse, that I've worked on my whole life."

That is not something you say right before you decide not to make a run for national office. Biden said Monday that he is still six weeks to two months away from making a final decision, but like, come on man. We know the deal!

Remember that Biden quite clearly wanted to run in 2016 but eventually concluded that the timing wasn't right, with the race coming so soon after the death of his eldest son, Beau, from brain cancer. But as CNN's Stephen Collinson noted at the time: "In tone, the remarks sounded like the kind of speech defending staunch Democratic values that he might have given had he reached the opposite conclusion."

What was clear then -- and is even more clear now -- is that the bug of running for president has not left Biden. His 1988 bid, in which he was considered a top tier contender, ended amid plagiarism questions. His 2008 campaign never really got off the ground -- eclipsed by brighter lights like Hillary Clinton, Barack Obama and, yes, John Edwards.

Biden would enter this race in a far different -- and better -- position than in either of his previous two bids. According to most early state and national polling, he is the race's front-runner -- albeit by dint of the fact he is the best-known candidate in the field. Still, that's a place Biden has never been before. And for someone who has spent his entire adult life aspiring to be president, that's a very hard prospect to pass up.

Which is why, almost certainly, Biden won't pass it up.

The bigger question I have is not whether Biden will run but whether the pitch he is planning to make to Democratic voters is the right one for this moment, against this President. Is being the "most qualified person" the way to sell yourself to Democratic voters desperately in search of someone who can beat Donald Trump?

Here's Biden, again on Monday, expanding on that "most qualified" idea:

"No one should run for the job unless they believe that they would be qualified doing the job. I've been doing this my whole adult life, and the issues that are the most consequential relating to the plight of the middle class and our foreign policy are things that I have -- even my critics would acknowledge, I may not be right but I know a great deal about it."

Which, on its face, is hard to argue. Biden was elected to the Senate at 29 years old. He's chaired the Senate Foreign Relations Committee and the Senate Judiciary Committee. He spent eight years as vice president. It's a long and impressive resume of work within the government.

But that last sentence also contains the two biggest potential problems for Biden when -- oops, if -- he runs in 2020: 1) He's not young and 2) His entire life has been spent in government.

Biden is 76 years old. He will turn 78 just a few weeks after the 2020 election. If he won, he would be, by far, the oldest person ever elected to a first term as president. (Trump currently holds that distinction -- at age 70.) And it's not just that Biden is on the older side. It's that the Democratic Party over the past few elections has shown how the face of its base is changing -- it's younger, less white, less male and more liberal. Biden is the opposite of all of those things.

Biden has ever really had one job in his life: Politician. The last two presidents -- Trump and Obama -- cast their lack of substantial political experience as a strength among voters who, well, hate Washington and everyone in it. There's an argument to be made that Trump's rocky -- to be kind -- time in office has convinced a majority of Americans that what is required in 2020 is someone who has been there and done that. But the fight between political innocence and political experience is one that still has to be fought out within the Democratic Party.

One thing I will give Biden: He's not only aware of his weakness (a huge advantage for any politician or, really, any human) but he is able to use humor to frame his flaws in the best possible light. Take this answer from Biden when asked on Monday night about his reputation as a "gaffe machine":

"I am a gaffe machine, but, my God, what a wonderful thing compared to a guy who can't tell the truth. I'm ready to litigate all those things. The question is, what kind of nation are we becoming? What are we going to do? Who are we?"

Does that sound like a candidate who isn't sure about running for president?