It's a variation on Benton's already popular homemade limoncello, which is served alone and in cocktails. The lemon version is made using 150-proof grain alcohol and heavy whipping cream.

The grain alcohol gives it a big punch, but the cream helps create multiple layers of taste. "It locks in the flavor of that lemon," he says.

The result is a delicious, smooth drink to start or finish the evening.

But what prompted him to start making his own limoncello in the first place?

Benton, a native of Winston-Salem and former actor, wanted to create a drink that would be the American version of the popular Italian drink. On a trip to Italy, he was inspired after seeing restauranteurs standing outside offering patrons a taste of their limoncellos.

"It was more of a marketing technique," he said.

He sought out to create his own version of the drink for Jimmy V's. It was an instant success, with Benton not being able to keep up with the demand. So far, the restaurant has gone through more than 78 gallons of it.

Benton prepares the batches three gallons at a time in the Sheraton Hotel's kitchen. The extra space is a benefit of having the restaurant located in the hotel.

The Pumpkincello, which comes out Oct. 14, is created using small baby pumpkins. Benton roasts them, skins them and stomps the juices out. The juice is added to the alcohol. To achieve a "pumpkin pie" taste, Benton stews the simple syrup with spices including nutmeg, cinnamon, brown sugar and cloves.

In spring, Benton will serve up a blood orange version of the drink and then switch over to watermelon for summer.

It is all part of his mission to keep the bar's cocktail menu evolving.

Fall cocktails take you around the world

The new cocktail menu, which starts Wednesday, will include updated takes on classic cocktails. Look for drinks containing sake, Brazilian and Hungarian wines and flavor combinations you might not expect. 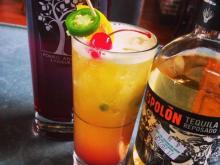 Cloudy with a Chance of Olives ($10) - Featuring a Polish Potato Vodka shaken hard with olive brine and served up with blue cheese stuffed olives, this dirty martini will have some flair.

Island Sunrise ($9) - Epolon tequila, fresh muddled jalapenos and a Caribbean grenadine and orange juice all combine to give this drink a kick.

The Mojave Gimlet ($10) - Bombay Sapphire Gin, Rose's Lime Juice and Mojoavian Desert Agave Nectar all make this a unique drink. "The tart and sweet contrast in this drink is different and well worth the try," Benton says.

Caipirnha ($12) - The national cocktail of Brazil features Leblon Cachaca (a sugar cane spirit made specifically in Brazil), sugar cane simple syrup and muddled lime. "The Cachaca mixes with the lime juice to give the guest the most refreshing punch in the face ever. Not a weak drink by any means," Benton said. 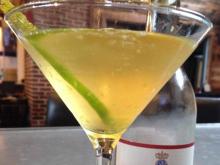 Martinit ($12) - Hungarian for Martini, this drink features Absolute Citron vodka, Frangelico, Hungarian Tokaji and lime zest. "This cocktail is something that I played around with for a while. I love Tokaji, which is the Hungarian form for the name of the wine from the Tokaj wine region, an area known for its sweet wines," Benton said. "This wine is very sweet and complex and has every earthy berry that has ever existed in it, it seems. The martini will be an instant hit once the first is ordered."

Bow to your Sensei ($9) - Featuring Gekkeikan sake, honey-lemon simple syrup and tonic, this drink is a fun combination. "It is very clean tasting with a bit of sweet to contrast the bite of the Sake," Benton said.