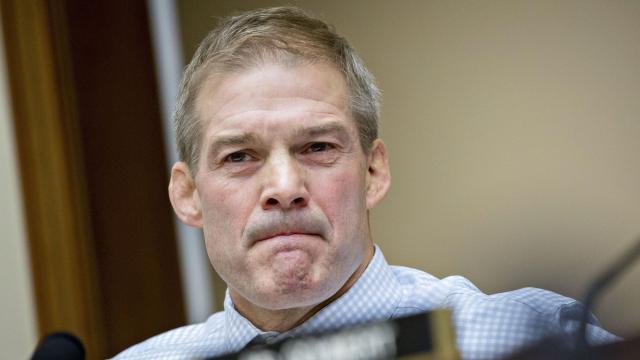 (CNN) — Rep. Jim Jordan is expected to be the top Republican on the influential House Oversight and Government Reform Committee in the next Congress, after the GOP Ohioan dropped his effort to be President Donald Trump's chief defender on the House Judiciary Committee.

House Majority Whip Steve Scalise, who will be the House's no. 2 Republican next year, said the Steering Committee, whose members decide which Republicans will be the top GOP member on each committee, had decided Jordan would get the Oversight Committee position, after Jordan expressed interest in the position to the committee on Thursday evening.

Earlier, Jordan's office announced that he is no longer running for the top Republican slot on the committee after a spokesman from his office told CNN it was made clear to Jordan that leadership would be selecting someone else for the job.

Two other candidates -- Ohio Rep. Steve Chabot and Georgia Rep. Doug Collins -- were already running. A source familiar told CNN the Steering Committee selected Collins. He will still have to be ratified by full conference, but Collins is likely to be the next Judiciary ranking member and a foil to Democrat Jerry Nadler of New York, who is expected to become chairman.

The news comes just days after Jordan announced he was interested in running for the post, leaving members of the Steering Committee scratching their heads. Jordan had long been seen as a potential candidate to fill the ranking member slot on the House Oversight Committee where he had the most seniority. Seniority doesn't guarantee Jordan would have been selected for the position, but it is a factor for the Steering Committee.

The House Judiciary and Oversight committees are expected to be in the spotlight next Congress when Democrats take the gavels and begin their rigorous oversight of the Trump administration.

In recent days, a congressional source confirmed that there had been discussions between the President and members about the leadership dynamics and committee roles. Before Thanksgiving, CNN reported that in private conversations with McCarthy, the President pushed for Jordan and Meadows to have the top Republican positions on key committees, according to a source familiar.