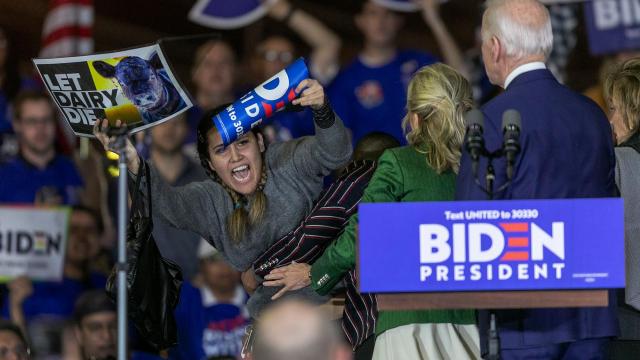 CNN — Jill Biden wasted no time when two women separately charged toward her husband Joe Biden as he spoke at his Los Angeles rally Tuesday night -- physically inserting herself into the commotion until the protesters could be escorted out.

The moment came as the former vice president joyfully addressed supporters amid a strong showing on Super Tuesday.

"It's a good night. It's a good night," Joe Biden said, while standing next to Jill and his younger sister. "It seems to be getting better. They don't call it Super Tuesday for nothing."

Jill Biden was joined in protecting her husband by campaign senior adviser Symone Sanders, who rushed the second protestor, wrapping her arms around the woman and marching her off stage before she could reach Joe Biden.

"I broke a nail," Sanders tweeted after the scuffle.

After a man shouted at her husband and approached his lectern at a New Hampshire rally last month, she leaped from her chair to help others keep the man from getting too close to her husband.

After that event, when asked by reporters about the heckler, Jill Biden laughed and said, "I'm a good Philly girl."

Her penchant for physical defense underscores the important role she's forged as a forceful campaign surrogate. She has quickly risen as one of Joe Biden's top representatives and is one of the most active spouses hitting the campaign trail.

The Biden campaign has deployed her to each of the early states, often as a closer for her husband's speeches as well as headlining events of her own, with the former second lady telling CNN she sees her campaign role as being a "partner" to her husband.

"Joe and I've been married for 42 years. This is how we've always done things. I've campaigned in every election," she previously told CNN. "I go one way, he goes the other way, and so we can cover more ground and talk to more people."