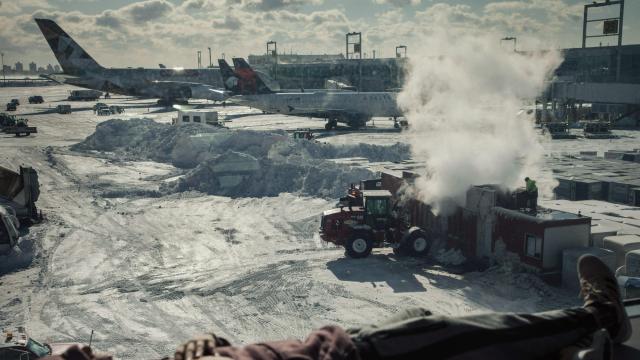 In a statement Saturday, the Port Authority of New York and New Jersey said all flights scheduled to arrive at Terminal 1, which is operated by Air France, Lufthansa, Japan Airlines and Korean Air, would be affected by the limitations for the rest of the night. It also warned that the delays of Saturday were expected to continue.

Leah Golubchick, 31, had been trying to get to Denver since Friday.

Her itinerary on Delta Air Lines was rescheduled once, then rescheduled again for a flight that was supposed to leave at 8:30 a.m. Saturday. At noon, she was still waiting.

“The crew has no estimated time for when the plane is supposed to come in,” she said.

She was first told the delay was because “the baggage machines were frozen.” A few hours later, she was told a plane was snowed in at the hangar.

Irritated travelers took to Twitter to vent their frustration.

One woman, who tweeted about an 11-hour delay, photographed an enormous pile of unclaimed luggage at the airport. “Is it better that my guitar is still in the freezing plane than just sitting out here?” she asked.

The Port Authority, which operates the three major airports that serve the New York City area, attributed the problem in a statement to “a backlog of flights that has resulted in a reduction in gate space.”

The agency said it was working “to limit the arrival of flights into JFK Airport until there are adequate gates available.”

The statement added, “The Port Authority intends to aggressively review with its partners, the terminal operators and airlines, the process to assure that planes and passengers get to their gates during the surge of rescheduled flights that follow a severe weather event.”

On Friday night, an Air France flight spent nearly six hours on the tarmac after arriving at Kennedy, passengers said.

“Communication was horrible,” Amy Veinoglou, 29, who was traveling from Paris with her fiancé, said in a phone interview Saturday. “Nobody was telling us anything.”

Veinoglou said Air France had transferred them to a shuttle bus where they sat for 45 minutes. Even then, she said, it was “complete chaos.”

“One bus cut us off and let off their people, and then our bus driver had to do all this maneuvering around and there was no one there to direct him,” Veinoglou said.

They waited for hours amid empty luggage carousels that some passengers used as makeshift beds. Eventually, she and her fiancé gave up and headed home around 7:30 a.m. after spending nearly nine hours at the airport.

The baggage claim area inside Terminal 4 around noon Saturday was a field of unclaimed luggage, with tagged bags, duffels, suitcases and other containers in the center of the floor, along the walls and on a pair of carousels that turned slowly in front of bleary-looking travelers.

A line trailed out of the Delta baggage service office, and Deena Clarke of Miami stood about five customers away from finding out whether her luggage was waiting at the desk or was someplace else, like the daunting pile in the middle of the floor between the carousels.

“They told me my bag was either on Carousel 10 or Carousel 11, or in the middle,” Clarke, 30, a University of Miami graduate student, said. “So I looked and it wasn’t there. And then at about 3:20 they said that due to the weather conditions, they weren’t going to drop off any more bags, and a fight broke out.”

Thomas Noone, 39, a lawyer from Brooklyn, endured a two-day baggage ordeal after he and his family returned Friday night from a trip to Miami.

He said his Delta Air Lines flight from Fort Lauderdale, Florida, landed around 10 p.m. and then sat on the tarmac for 40 minutes, swaying as heavy winds tipped the plane’s wings. “People were getting sick on the plane,” Noone said, comparing the motion to sailing in rough waters.

Noone said he, his wife and two sons, ages 2 and 4, finally got into the terminal, determined to wait for their baggage, but only lasted until around midnight because his older son became ill. Everyone went home, he said, and Noone returned by himself for the family’s luggage.

“And from the stories I’ve heard, I didn’t even have it all that badly,” Noone said.

The federal authorities can fine airlines for leaving passengers sitting in a plane on the ground for more than three hours if it is a domestic flight or four hours if it is an international flight. The fines can be as much as $27,500 per passenger.

The Federal Aviation Administration said Saturday that Kennedy terminals 1, 4 and 7, which handle international flights, were at capacity, which is why there weren’t enough gates for some incoming flights. The agency notified international carriers to call ahead and request a time for departure before leaving. Separately, an AirTrain at Newark Liberty International Airport broke down Saturday morning, stranding nine passengers who had to be rescued, the authority said. The AirTrain resumed full service by early afternoon.

The weather wasn’t the only problem affecting Terminal 4 at the airport. Early Saturday morning, a China Southern airplane struck a Kuwait Airways aircraft, damaging both planes.

Delays continued at several other airports, including in Atlanta, Chicago and Washington, according to FlightAware.com, a website that tracks flights. Airlines canceled more than 4,300 flights scheduled to travel in, into or out of the United States on Thursday, and more than 1,500 flights on Friday.

Around 1 p.m. Saturday, after waiting for about five hours in Terminal 2, Golubchick’s plane finally pulled up to the gate, she said. About 40 minutes later, she sent an update by text: “We are on the plane! We’re just happy to not be in JFK, but I’ll relax once we’re in the air.”