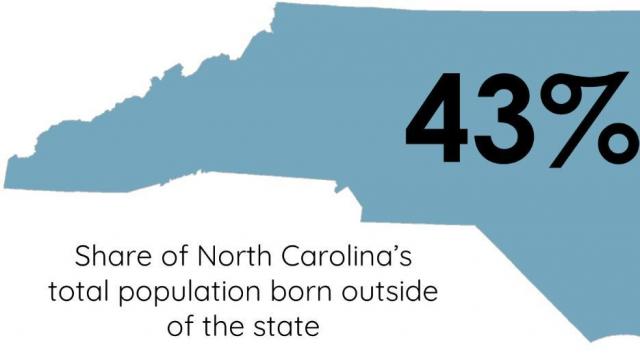 EDITOR'S NOTE: Jessica Stanford is a Demographic Analyst with Carolina Demography at the Carolina Population Center at UNC-Chapel Hill. Her research interests focus on sustainable development, especially in the field of agriculture and food systems. See the full post, including graphics and images here.

The percentage of North Carolina's total population not born in North Carolina continues to rise. Recent estimates from the American Community Survey indicate that 43 percent of the overall population is non-native, up 1% from previous five-year estimates when this share was 42 percent.

This share is even higher among the adult population. Nearly half of all individuals 18 and older were born somewhere else and this group has grown faster than the population overall. This growth reflects how attractive North Carolina is to migrants of all ages with a range of educational, employment and retirement opportunities. If these prospects remain abundant, the share of adult North Carolinians born outside of the state may continue to increase.

While the state share of non-native residents is 43 percent, the share of residents born outside of the state varies dramatically across our 100 counties. In eighteen counties, more than half of residents are non-native. Currituck County ranked number one among these counties with three-fourths of its population born outside of the state. Currituck’s close proximity and economic ties to the Virginia Beach metro area likely contributes to this large non-native population share.

Over the past five years, two new counties have seen their non-native population grow to at least half: Union County (51 percent) and Brunswick County (53 percent). These additions likely reflect the expansion of the Charlotte metro area into Union and the appeal of Brunswick County for many out-of-state retirees.

At the other end, there were 23 North Carolina counties where less than one-fourth of residents were born outside of the state. Though the total number of counties has not changed, the list of counties has changed considerably in the past five years. Four counties had non-native populations greater than or equal to 25% during 2007-2011 but not in 2012-16: Hyde County (31 percent), Graham County (30 percent), Wilson County (26 percent), and Richmond County (25 percent). Hyde County and Graham County saw the most significant losses at 10 percent and 5 percent, respectively.