This Jeff Sessions video is very hard to watch 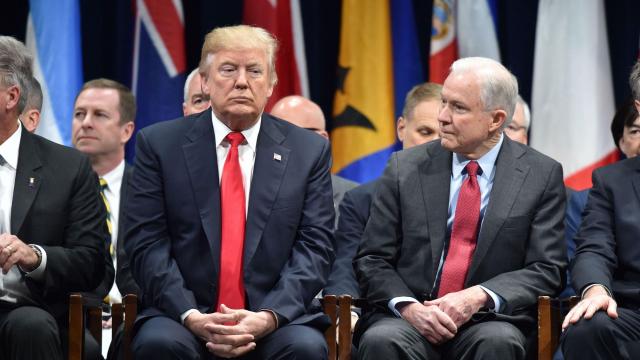 CNN — When Jeff Sessions announced Thursday night that he planned to run for his old Senate seat in 2020, he had a very simple message to convey: He still really, really likes Donald Trump. Like, a lot.

"When I left President Trump's Cabinet, did I write a tell-all book? No. Did I go on CNN and attack the President? Nope," Sessions said in a video released by his campaign. "Have I said a cross word about President Trump? Not one time. And I'll tell you why: First, that would be dishonorable. I was there to serve his agenda, not mine. Second, the President is doing a great job for America and Alabama, and he has my strong support."

And then, later in the announcement video, Sessions added this:

"When President Trump took on Washington, only one senator out of 100 had the courage to stand with him: me. I was the first to support President Trump. I was his strongest advocate. I still am."

That level of craven sycophancy would be awkward under any circumstances. But, it's even harder to stomach when you consider that Trump spent much of Sessions' tenure as attorney general running down the Alabama Republicans as dumb and disloyal.

(Worth noting: There is also a strong hostage video vibe in the Sessions' announcement. It's just him, in front a plain white backdrop, talking to the camera. Which given the content of the video is, well, a little on the nose.)

"Attorney General Jeff Sessions has taken a VERY weak position on Hillary Clinton crimes (where are E-mails & DNC server) & Intel leakers!," Trump tweeted in July 2017. Eleven months later, Trump sent this tweet: "The Russian Witch Hunt Hoax continues, all because Jeff Sessions didn't tell me he was going to recuse himself...I would have quickly picked someone else. So much time and money wasted, so many lives ruined...and Sessions knew better than most that there was No Collusion!" In August 2018, Trump said Sessions was "scared stiff and Missing in Action." And the Washington Post reported that Trump regularly referred to Sessions as "Mr. Magoo" during White House meetings.

Rough, rough stuff. Like, we are deep in thank-you-sir-may-I-have-another territory here.

Why is Sessions doing this? Why suck up to a guy who spent a year publicly trashing you and then fired you as soon as he could politically do so? (Trump fired Sessions the day after the 2018 midterm election.)

The Republican Party of 2019 is, effectively, a cult of personality built around Trump. If you want to win office or stay in office, the way to do it is to venerate Trump -- and never, EVER say a negative word about him. That directive explains the eye-popping transformations of the likes of Sens. Lindsey Graham (South Carolina) and Rand Paul (Kentucky) from outspoken Trump critic to loyal subjects. And why Jeff Flake is no longer in the Senate after criticizing Trump publicly.

Sessions knows that the only path to winning for him in Alabama -- a state Trump won by 28 points in 2016 and where he remains very popular -- is to find a way to get back into the President's good graces. And that the surest way to do that is to flatter Trump. Like, over-the-top flattery. Saccharine.

That what Sessions is doing is hugely transparent -- saying nice things about Trump because he needs the President to not blast him publicly -- doesn't mean it won't work. Asked Friday morning about Sessions' Senate candidacy, Trump said this: "I saw he said very nice things about me last night but we'll have to see. I haven't made a determination."

Which, if you are Sessions, is great news! Trump didn't call him any names! Or say he was unfit for the office.

With those encouraging early results, you can expect Sessions to continue to throw himself prostrate at Trump's feet. Anything for a Senate seat, I guess.