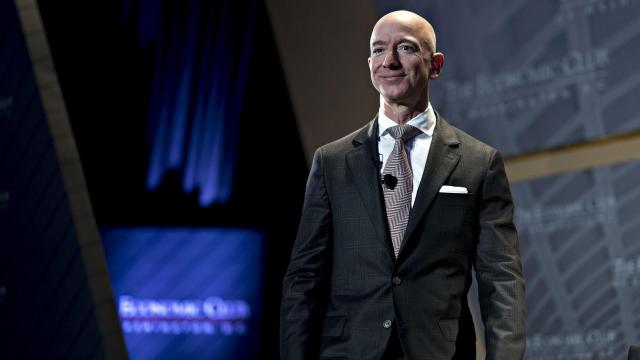 That is what Amazon chief financial officer Brian Olsavsky told analysts on the company's earnings call Tuesday -- a call that Bezos wasn't even on, despite the announcement moments earlier that he would be stepping down as CEO later this year, with Andy Jassy as his successor. (Bezos will remain as Amazon's executive chairman.)

But Bezos' absence on the call probably doesn't matter. Amazon's stock was flat in early trading Wednesday. Strong earnings and revenue for the fourth quarter and a healthy outlook for 2021 clearly helped soften the blow of the Bezos bombshell.

Plus, Amazon analysts and investors are already accustomed to the fact that Bezos, who personally owns The Washington Post and space company Blue Origin, has many other interests.

The last time that the Amazon founder spoke on an analyst earnings call was in April 2009. Bezos has appeared at several annual shareholder events in recent years though, most recently at a virtual meeting in May 2020. But Amazon hasn't been the Jeff Bezos show for some time now.

That's undoubtedly because Amazon has its hands in a LOT of different pies. It's no longer just an online retailer. It has a physical presence with its own brick and mortar branded stores and it also owns the Whole Foods grocery chain.

It is also a streaming media giant, and it is making bigger inroads into healthcare following its 2019 purchase of online pharmacy PillPack.

But Amazon's real money maker is Amazon Web Services, or AWS. That's the cloud giant that Jassy leads. AWS gets paid to host websites for top companies; Coca-Cola, McDonald's, Netflix and Verizon are all AWS customers.

AWS posted an operating profit of $13.5 billion in 2020, accounting for nearly 60% of all of Amazon's operating income. So it's only natural that Jassy, who has been with Amazon since 1997, will succeed Bezos.

"Although not as familiar a face to the general public as Bezos, Jassy is exceptionally well regarded by the investment community," said Michael Levine, an analyst with Pivotal Research Group, in a report Wednesday.

The fact that Bezos is staying put and getting the fancier title of executive chairman also likely means that Amazon will not be changing its strategy all that much under Jassy.

And why should it? Amazon is now one of the largest companies in the world, worth nearly $1.7 trillion. The stock is trading near an all-time high and is up more than 500% in the past five years -- much better than the broader market. What's that they say about if it ain't broke, don't fix it?

"We expect Andy Jassy as CEO to mean a continuation of Amazon's key themes of delighting the consumer and executing as scale builds/compounds in all of its businesses," said UBS analyst Eric Sheridan in a report Wednesday.

Of course, there are risks any time an iconic CEO steps down. Howard Schultz was forced to return to the Starbucks CEO role in 2008 after stepping down in 2000, before he finally passed the reins on to Kevin Johnson in 2016.

But it probably helps that Bezos is will still be heavily involved with Amazon. He could assist Jassy with longer-term strategic planning, much as former Google/Alphabet CEO Eric Schmidt did from 2011 through 2017 when he remained as chairman after founder Larry Page took over as CEO in 2011.

"Although Jeff Bezos is stepping down as CEO, we believe he will remain integral to Amazon's strategy, and the incoming CEO Andy Jassy is a long-time executive at the company so leadership will remain strong," said Mizuho Securities USA analyst James Lee in a report Wednesday.

The only slight change Lee sees going forward is "a potential emphasis towards the cloud business."

In other words, Amazon investors can be forgiven if they are humming an old song lyric from The Who on Wednesday. "Meet the new boss. Same as the old boss."