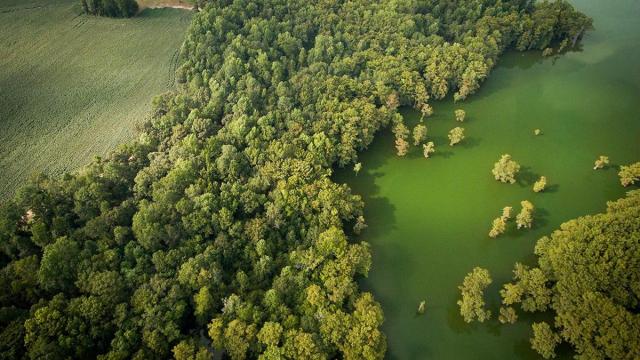 EDITOR'S NOTE: Jared Lloyd is a professional wildlife photographer and nature writer. Growing up on the Outer Banks, he has spent much of his life exploring the barrier islands, pine savannahs, black water swamps and sounds of North Carolina. These days his photography and writing carry him all over the world from Africa to the Amazon, the Galapagos to Yellowstone, but the lure of the salt life along the coast keeps bringing him back to North Carolina. This column was initially posted by the Coastal Review, a news service of the N.C. Coastal Federation.

The assignment seemed simple enough: Go check out Bennet’s Millpond outside of Edenton and create some photos. There was an algal bloom. It was spreading. And Coastal Review was doing a series on water quality issues in North Carolina.

Little did I know that the experience would leave me sitting on the side of a country road with a blinding headache, lungs on fire, throat burning, and haunted by a young family that was just found dead in similar circumstances.

When it comes to algal blooms, this wasn’t my first rodeo. Growing up along the coast of North Carolina, where wastewater ponds from hog farms pockmark the landscape like so many dimples on a golf ball, and the fields of King Cotton can spread to the horizon, you become accustomed to these sorts of things — especially during hurricane season when the rains help spill all these extreme loads of nutrients into our waters.

I knew these blooms were the result of intensive agriculture, development and other human activity. I knew they typically resulted in countless thousands of dead fish. I knew they smelled bad. I knew climate change was intensifying it all. But I didn’t know it could kill you.

Pulling up to the boat ramp of the old millpond, the first thing that struck me were the fumes. Well, that and the fact that there was no life, no birds, no dragonflies. It was hot. The gasses emitting from the bloom were overwhelming. In the moment, I chalked it all up to the fact that trillions of tiny algae were living and dying, and dead, rotting masses of stuff tend to stink. But it was all made that much worse because of the humidity, allowing me to breathe in what I would come to learn was a potential cocktail of toxins deep into my lungs where it would be absorbed into my blood.

I yanked a neck gaiter up around my nose and mouth to help cut down on the smell and began to explore the area.

When you want to capture the essence of a thing, you never just walk up, snap a few photos, and call it a day. You explore, both with your eyes and your feet, and you size up the situation. You start to pick apart the who, what, where, when, why and how of it all. And you start working your way through the thought experiments of how best to tell a story in a photograph.

To do this, we have what photojournalists call the holy trinity of lenses: a 14-24mm lens for capturing big-picture stuff, a 24-70mm lens that is the workhorse, and a 70-200mm lens for distance or details when you can’t get close. These are the tools we can’t live without. And for me, I add a drone to that list as well.

Drones, or unmanned aerial vehicles, UAV, have revolutionized visual communication and storytelling. Sometimes a thing cannot be understood by looking at its parts. An algal bloom is one of those things.

But to rise above it all, to climb into the air and look down upon the world reveals the bigger picture. It gives us perspective.

And so, with my trusty drone in the air, a piece of kit I’ve dragged all over the Western Hemisphere, I took a gods’ eye view of the state of things.

In under 20 minutes of standing by the edge of the millpond, my throat began to burn. Not like strep throat, however. This was different. More like inhaling bear spray, something I have experience with. And within minutes, it was my lungs, they were on fire. I began coughing. Hacking. Spitting. Before long, the headache set in. At times I couldn’t catch my breath — also like bear spray.

Have you ever heard of Very Fast Death Factor?

But it’s a thing. And it’s way worse than murder hornets.

Which does leave me wondering, who comes up with these names?

Despite sounding like the name of a college metal band, Very Fast Death Factor is serious stuff that does exactly as the name implies — it kills things very quickly. This is the nickname that researchers have given a peculiar little toxin that blue-green algae can emit called Anatoxin-a. Very Fast Death Factor is one of many neurotoxins that a seemingly harmless little algae in our ponds and rivers can pump out. Another is saxitoxin. Its nickname is paralytic shellfish toxin — also bad, also deadly, also here. And it killed a water-skier in Wisconsin who inhaled the aerosolized version of this toxin.

Clearly, I survived. I traded out the neck gaiter for an N95 mask. But the damage was done. Minute after minute, my symptoms intensified. And eventually I realized the severity of the situation. In under an hour, I went from healthy energetic me to coughing, headache, burning lungs, dizziness, and outright awful.

A half-gallon of water made my throat feel better.

An hour of fresh air while driving with my windows down made my lungs stop burning.

And within a couple of hours, the headache was gone.

All I was left with were questions. So many questions.

There had been no signs, no warnings, no “Beware of the Very Fast Death Factor,” and no “stay away from the algal blooms burping clouds of death.” Nothing.

On Aug. 17, the bodies of John Gerrish, Ellen Chung, their 1-year-old daughter, Miju, and their family dog were found dead along a trail that hugged the banks of the Merced River in California. This is a strange one. No weapons. No obvious cause of death. Even the baby and dog were dead. All there. All together. All at once. The National Forest Service had just issued a warning along the very same trail about a harmful algal bloom. 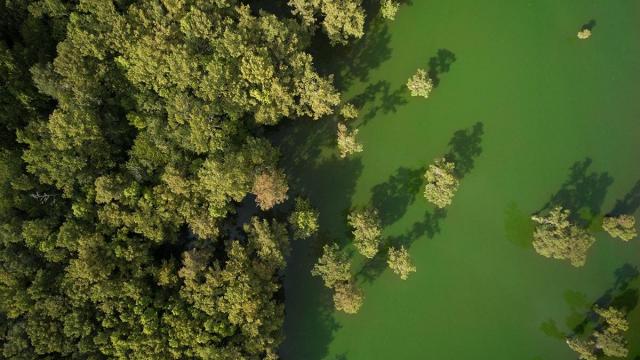 While the world and I wait for that toxicology report, the leading hypothesis behind the death of this family is neurotoxins from that algal bloom.

We know very little about these toxins and their ability to be aerosolized — how they are made airborne. Even though these neurotoxins are known to be some of the deadliest on the planet (hence Very Fast Death Factor), it wasn’t until 2019 up in Nantucket, Massachusetts, that anyone decided to test the air around algal blooms for this stuff. Low and behold, there it was.

I reached out to Haley Plaas, the University of North Carolina Institute of Marine Sciences researcher who took samples from Bennet’s Millpond to study the toxin concentrations present in both the water and air, about my experience. I ran down a list of my symptoms, the circumstances, and the timeline of recovery.

“This kind of anecdotal evidence is fairly common, but under-reported”, she said. “(These) reports are super important for my work …” However, it will still take another month before the sample results come back from the lab.

Given that we are just now beginning to learn that toxins are at times hanging in the air around these algal blooms, anecdotal evidence is largely all we have to go by. Meanwhile, the algal bloom continues to spread. There are still no warnings or closures. And now there is another one building up on the Pamlico River.

(EDITOR'S NOTE: This column was updated to delete repeated content and add the proper conclusion.)