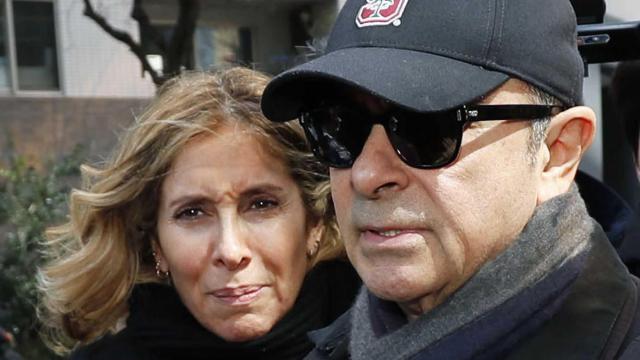 Authorities obtained the warrant against Carole Ghosn for allegedly giving false testimony during a court hearing last April, according to a statement from the Tokyo prosecutor's office on Tuesday.

Carole Ghosn is in Lebanon with her husband, according to CNN affiliate TV Asahi. He has denied reports that his family members were involved in helping him flee from Tokyo last week.

A friend of the family said Carole Ghosn had never been arrested or charged, and accused Japanese authorities of "trying to intimidate an innocent woman."

"Let's remember that the last time Mr. Ghosn was released and wanted to give his side of the story, he was rearrested the day after. We are again one day away from Mr. Ghosn speaking out and we are seeing the same threats," the friend added.

Ghosn is widely expected to hold a press conference in Beirut on Wednesday.

Japanese authorities have been scrambling to contain the fallout from Ghosn's audacious escape and figure out how he pulled it off in the first place.

On Sunday, Justice Minister Masako Mori said Ghosn had left the country "illegally by unjust methods," and she ordered Japan's immigration department to "further tighten" rules for leaving the country "so that the same situation won't be repeated."

Japan's ambassador to Lebanon, Takeshi Okubo, raised Ghosn's case with Lebanese President Michel Aoun on Tuesday. Aoun said the Lebanese government had no involvement in the incident and pledged "unstinting cooperation" to Japan, the Japanese ambassador said in a statement.

Ghosn was arrested in November 2018 and has since faced a litany of charges, including allegations that he understated his income for years and funneled millions of dollars of Nissan money to a car dealership that he controlled. The arrest led to his ouster from atop Nissan and its automotive alliance with Renault and Mitsubishi Motors.

Ghosn has repeatedly denied the charges, claiming that his arrest was part of a plot to remove him from the business empire he had built.

Before fleeing to Lebanon, the former auto executive had been under strict bail conditions in Tokyo, which included no contact with his wife. On Tuesday, the Tokyo district court said that Ghosn's 1.5 billion ($13.8 million) bail had been forfeited, the highest forfeited sum ever, according to local broadcaster NHK.

Carole Ghosn had for months been blasting Japanese authorities for how they were handling her husband's case, and calling on world leaders such as US President Donald Trump, French President Emmanuel Macron and Brazilian President Jair Bolsonaro to step in.

He has already been using his newfound freedom to rail on Japan's criminal court system, which boasts a conviction rate above 99% once suspects are charged. Ghosn said he was held "hostage" by the "rigged" system.