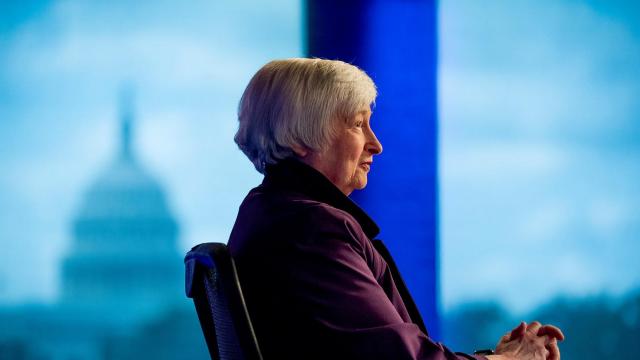 Yellen, who would be the first female Treasury secretary in American history, underscored the urgency of Biden's proposed $1.9 trillion stimulus proposal. With interest rates at historic lows, she said, "the smartest thing we can do is act big."

Providing relief for those in the greatest need — especially minority workers and women, who have been hit hardest by the downturn — would give the government the most bang per buck. Yellen advocated for extended unemployment insurance and investing in the vaccine rollout to accelerate the recovery.

Yellen, a former Federal Reserve chair, told the Senate Finance Committee at her confirmation hearing Tuesday that she would also overtime work to get an additional stimulus package passed "to get through these dark times before the vaccination program enables us to go back to life as we knew it."

Yellen also defended Biden's plans to raise the federal minimum wage to $15 an hour, saying she believed job losses would be minimal if wages went up.

Biden last week proposed one of the largest relief packages in history in an effort to address the economic and public health crises he will inherit when he takes office Wednesday.

"The pandemic has caused widespread devastation," Yellen said in her testimony. "The damage has been sweeping, and as the President-elect said last Thursday, our response must be, too."

Lawmakers have already enacted trillions of dollars in relief funds under President Donald Trump to address the crisis created by the coronavirus pandemic. But with job losses ticking up and millions still unemployed, Biden and congressional Democrats have made clear their first legislative priority will be a wide-ranging stimulus package.

America's role in the global economy

"I believe we should try to address unfair trade practices, and the best way to do that is to work with our allies rather than unilaterally," Yellen added.

She added that there would be a review of current US sanctions under her leadership of the Treasury Department, to make sure they are strategic.

She called out the need for efficient taxation of multinational companies and said that negotiations through the Organisation for Economic Co-operation and Development would pave the way for that.

Yellen said US firms would have to be able to be globally competitive and better taxation "would enable us to collect a fair share from corporations while maintaining competitiveness."

Yellen also said the United States does not seek a weaker currency in order to gain a competitive advantage on the global market.

Yellen has widespread support for her nomination. All living former US Treasury secretaries called on Congress to swiftly confirm her.

"We believe that delaying the confirmation of our government's principal economic official would create unnecessary risk during this critical time," said the endorsement, signed by Republicans like Hank Paulson and John Snow as well as Democrats Robert Rubin and Larry Summers. It was released Tuesday ahead of the hearing.

The former officials warned that the United States faces "unprecedented economic conditions" that will require thoughtful engagement from the Treasury Department.

"Any gap in its leadership would risk setting back recovery efforts," according to the letter, which was also signed by James Baker, George Shultz, Tim Geithner and Jacob Lew.

Yellen, the first woman to lead the Federal Reserve, has the credentials required by the crisis, the former officials said.

"It is our view — based on personal experience for many of us — that Dr. Yellen's experience, knowledge, judgment, and character make her uniquely qualified for this role," the letter said.

The former Treasury secretaries pointed out that Yellen was previously confirmed by the Senate, most recently in 2014.

"It is hard to imagine a better prepared nominee to meet this great moment of need than Dr. Yellen," they wrote.

The hope is that Yellen's confirmation will reassure nervous allies overseas.

"Any delay in confirming Dr. Yellen will only allow concern and confusion to grow among our allies," the letter said.

-- CNN's Phil Mattingly and Matt Egan contributed to this report