Jan Kimble: 'We always told Jamie we loved her and were concerned'

Starting with puberty, parents walk a fine line between over-involvement and hands-off. And at no time is that line more confusing than when a teenaged or young adult child is in love with an abuser.

Come down too hard about the person controlling or hurting your child physically or emotionally, and a child may resist and defend their beloved. Ignore the signs of a troubled relationship, and risk injury or death for your child.

Men, too, are victims, along with members of the LGBTQ community.

Ron and Jan Kimble of Charlotte know these statistics well. Their only child, daughter, Jamie, was killed on Labor Day in 2012.

Jamie was shot down on a Tampa street by her ex-boyfriend, who then turned the gun on himself. This after he unexpectedly appeared from Kansas City and picked the 31-year-old up from the Tampa airport when she'd returned from a trip to England.

But before that fateful day, they were worried parents.

Jan never liked her daughter's partner, while Ron admits that it took him three years to finally see the manipulative and controlling man trying to run Jamie's life.

"We always told her we loved her and were concerned for her," Jan said. "At the end, it was her decision." 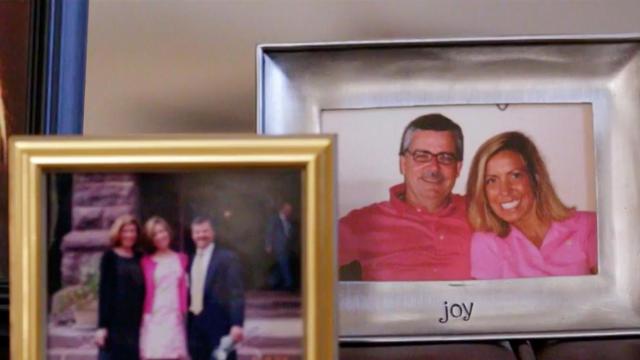 By all accounts, Jamie was an out-going, confident and compassionate woman, with a smile that would light up a room. No one can quite grasp why this accomplished young woman, a graduate from the University of North Carolina at Chapel Hill, had a seven-year relationship with a man who tried to control every aspect of her life.

"I learned very quickly not to talk about him, but be very specific about what I was seeing," Jan recalled. She didn't want to put her daughter on the defensive about her partner, so Jan instead pointed out the excessive texting or the way he always had to know where she was.

"I could see what he was doing in trying to control her," Jan said. "You have to be very careful. You just need to keep the lines of communication open. He would like nothing more than for the victim to shut out her family and friends. That would be playing into his hands."

After several break-ups over the years, he always managed to get Jamie back with promises that he would change. Jamie ultimately found the courage to leave the relationship.

The Kimbles have since learned that it is when the relationship ends that the victim is in the greatest danger.

Maybe they could have warned Jamie. But three months passed between the break-up and the day she was murdered, and the two had moved away from each other, putting many states between them.

Maybe Jamie wouldn't have gotten in the car with him if she knew the danger, especially if she had known he was armed. Her abuse had been mental and emotional, never physical (that anyone knows), until it was fatal.

The Kimbles don't want other victims.

"Don't be quick to judge, and hear them out," Jan cautioned parents. "If you already have bad vibes about the person they're dating, don't say anything bad about the person, but be specific about the behavior -- constant phone calls or who they can talk to. Bring this to their attention."

She added, "Your daughter or son will have to come to the realization that the relationship isn't healthy."

Ron, who is Charlotte's retired deputy city manager, is proud that his daughter had the courage to at long last end the relationship. He and his wife refuse to allow her death to end her contributions.

"Jamie was a spirit -- a love -- telling us to do something good in the world," Ron said. 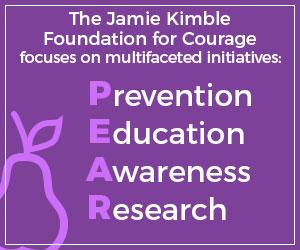 Ron seeks out speaking opportunities to boys in middle and high school about healthy relationships and anger management because up to 90 percent of abusers are male. The topic has come out of the darkness in recent years, especially since a few NFL players were caught on tape abusing their partners.

"Our mission is to start young and start early," Ron said. Most young men listen raptly as Ron describes what an abuser does to a victim that isn't physical. Much of the abuse takes place privately. Abusers shift blame or start a fight before visiting family or friends so that the victim can't relax or enjoy the visit.

Abusers shut down for hours or days to "punish" the victim. They go through the victim's personal items, steal passwords and do whatever it takes to control the victim. They're frequently jealous.

After a speech, several attendees will come forward and talk. Most recognize abusive behavior in friends or relatives and want to know what they can do. Ron answers that bystander intervention, like parent intervention, is to keep communication open, talk about behaviors and not the person, and then say how it feels to the parent or bystander to see those abuses inflicted on a victim.

There's no easy answer or single right way to deal with a child in an abusive romance. Much depends on the relationship between a parent and grown child. Here are suggestions from www.loveisrespect.org: